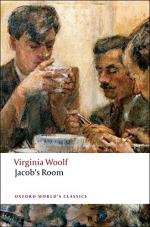 Related Topics
A Room of One's Own
Between the Acts
Flush: A Biography
Jacob's Room
Kew Gardens

Virginia Woolf
This Study Guide consists of approximately 36 pages of chapter summaries, quotes, character analysis, themes, and more - everything you need to sharpen your knowledge of Jacob's Room.

The following version of this book was used to create this study guide: Woolf, Virginia. Jacob’s Room. Harcourt Brace, 1960.

Jacob’s Room is a linear novel concerning the life of Jacob Flanders, a fictional character whose life spans from approximately 1988 to 1914. It is written in the past tense. The novel begins during Jacob’s early childhood. Jacob’s mother, Elizabeth “Betty” Flanders, takes her three sons to Cornwall, England in the wake of her husband’s death. In Cornwall, Betty grieves for her husband while watching her sons play on the beach. Later, Betty and her sons return to their home in Scarborough, England, where Betty continues to receive weekly visits from her friend and neighbor, Captain Barfoot. Captain Barfoot’s relationship with Betty appears to be similar to that of a suitor, and though Betty is a widow, Captain Barfoot is still technically married. Betty receives a love letter from Andrew Lloyd, a local clergyman. However, she rejects Mr. Lloyd’s advances because she is still aggrieved by her husband’s death.

The novel moves ahead to Jacob’s time in university. Jacob attends the University of Cambridge, thus residing outside Scarborough for the first time in his life. There, he studies literature and meets various future friends such as Timothy Durrant and Richard Bonamy. Although Jacob, Timothy, and Bonamy are all from wealthy families, Jacob’s upbringing appears to be much more rural than those of his friends. During a school vacation, Jacob sails around the coast of Cornwall with Timothy Durrant, and they arrive at Timothy’s hometown. There, Jacob meets Mrs. Durrant and Timothy’s sister, Clara Durrant, both of whom seem to take a liking to Jacob.

Once Jacob graduates from university, he moves to London instead of returning home to Scarborough. In London, Jacob never seems to pursue a steady occupation because he has no financial incentive to do so. Instead, he continues his studies independently and attends various social events in the city. He develops a romantic relationship with a beautiful yet somewhat unstable girl named Florinda. Despite Florinda’s uneducated background and wild temperament, Jacob and Florinda develop a sexual relationship. Meanwhile, Clara Durrant and a young woman named Fanny Elmer find that they have fallen in love with Jacob. Clara, who moved to London after completing her studies, finds that her attempts to become closer to Jacob do not come to fruition. Fanny Elmer, a dancer, attempts to become closer to Jacob by reading his favorite books, but Jacob ends up leaving London after deciding to take a tour of Continental Europe.

Jacob travels abroad at the age of 26, first visiting Paris and then Greece. Jacob finds that he has become quite sick of modern life, and he decides that the remedy would be to visit Greece and tour the ancient ruins. Jacob has spent much of his time in London studying ancient Greek literature, and he comes to idealize the art and civilization of the ancient Greeks. In Greece, Jacob writes letters to his friend Richard Bonamy proclaiming the virtues of his visit. However, Jacob becomes distracted from his sightseeing when he meets Sandra Wentworth Williams, a married Englishwoman who is touring Greece with her husband, Evan Williams. Jacob becomes quickly frustrated by this distraction, as well as Sandra Williams’ inaccessibility. He eventually returns to London, where he speaks excitedly of his journey to his friends. However, he remains lovesick, and a feeling of alienation and purposelessness soon overtake him once more. When World War One breaks out in Europe, Jacob enlists in the British army and is killed in combat. The novel ends with a scene of Betty Flanders and Richard Bonamy distraughtly clearing out Jacob’s London apartment in the wake of Jacob’s death.