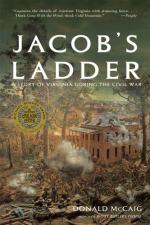 Jacob's Ladder: A Story of Virginia During the War Summary & Study Guide

Donald McCaig
This Study Guide consists of approximately 42 pages of chapter summaries, quotes, character analysis, themes, and more - everything you need to sharpen your knowledge of Jacob's Ladder.

Jacob's Ladder: A Story of Virginia During the War Summary & Study Guide Description

Jacob's Ladder: A Story of Virginia During the War Summary & Study Guide includes comprehensive information and analysis to help you understand the book. This study guide contains the following sections:

This detailed literature summary also contains Topics for Discussion and a Free Quiz on Jacob's Ladder: A Story of Virginia During the War by Donald McCaig.

Duncan Gatewood is the young master of Stratford Plantation. He and his sister, Leona, study with a neighbor girl, Sallie Botkin, from Sallie's father Uther Botkin. Duncan is out on the land when a terrible snowstorm hits and when he makes it back to the barn he finds a young slave girl named Midge waiting for him. The two begin an affair that angers Duncan's father, Samuel Gatewood, to the point that he sends Duncan away to military school. The affair continues and when Midge becomes pregnant with Duncan's child, Samuel buys a slave from Uther, a man named Jesse Burns, and forces Midge to marry Jesse, then changes her name to Maggie. Samuel later forces Duncan to admit to his folly, pointing out that the son, a boy named Jacob, is officially a slave and that Duncan's own son will be forced to work in the fields and could even be sold. Duncan in angered by his father's tactics and returns peremptorily to military school. Samuel then decides to sell Maggie and does so, her son Jacob at her side.

The selling of Maggie prompts Jesse to run away and Sallie and her new husband, a former school teacher named Alexander Kirkpatrick, harbor Jesse. Jesse is found and returned to Samuel. Sallie and Alexander are arrested and sentenced to five years in prison. Sallie is later released with her agreement to serve as a nurse for the Confederate Army and Alexander is released to be a soldier, though he runs away during the first battle. Alexander finds refuge with a family who call themselves members of the "Brethren," seeming to fit into their simple lifestyle with ease. When the young son of the house is accused by a group of renegades as being a Union spy, Alexander tries to distance himself from the family and obeys a command by the renegade leader to kill the boy. Alexander joins the group and they spend their time stealing until they're captured.

Meanwhile, Jesse and another slave named Rufus escape the plantation yet again. This time the two men make their way far north and when Rufus is killed, Jesse finds work and settles into a life of labor that is sweet because it is also a life of freedom. Given the opportunity, Jesse joins the Union Army and is eventually captured. When Duncan encounters Jesse by chance, he heeds Jesse's pleas and claims Jesse as his property, saving Jesse from a certain death in a Confederate prison. Duncan then helps Jesse escape back over enemy lines to the north.

While the war rages, Maggie finds herself bought by a man named Silas Omohundru who later sells Maggie into prostitution. With the war at its peak, Silas goes into the business of running the blockades with goods in great demand. Maggie and Silas find themselves at an impasse when Silas realizes that Maggie has avoiding having children so that her son, Jacob, is secure. Maggie, now calling herself Marguerite and passing herself off as a foreign bride to cover her mulatto coloring, believes Silas will never be able to love her son as his own. While the Union Army advances, Maggie escapes with Jacob and a single faithful servant, and with enough money sewn into her gown to open a bank during the reconstruction period. Maggie never again sees Jesse or Duncan. Duncan marries Sallie and the Gatewoods, with the help of a few faithful servants and their grandchildren, begin rebuilding their lives.

More summaries and resources for teaching or studying Jacob's Ladder: A Story of Virginia During the War.

Jacob's Ladder: A Story of Virginia During the War from BookRags. (c)2022 BookRags, Inc. All rights reserved.