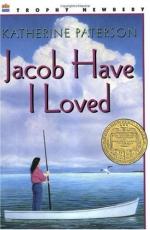 Katherine Paterson
This Study Guide consists of approximately 46 pages of chapter summaries, quotes, character analysis, themes, and more - everything you need to sharpen your knowledge of Jacob Have I Loved.

Jacob Have I Loved Summary & Study Guide includes comprehensive information and analysis to help you understand the book. This study guide contains the following sections:

This detailed literature summary also contains Quotes and a Free Quiz on Jacob Have I Loved by Katherine Paterson.

Jacob Have I Loved, by Katherine Paterson, is the story of thirteen-year-old Louise Bradshaw’s coming of age on the crabbing island of Raff during World War II.

When the novel opens, thirteen-year-old Louise Bradshaw spends her days crabbing on the island of Raff, where she lives her parents and twin sister, Caroline. Louise and Caroline have a tempestuous relationship, as Louise believes Caroline, who is musically gifted, has been favored since birth. She longs to work on her father’s crab boat with him. But, since she is a girl, she is resigned to her own small skiff, which she works with her best friend, Call. When a mysterious stranger arrives on Raff, Louise begins investigating his identity, imagining that he is a war spy and that outing him will bring her the international recognition she craves. During her first interaction with the old man, however, Louise realizes that he is not a spy. The old man, whom she calls “The Captain,” tricks her into working for him, for free, for the entire summer.

Call and Louise spend most of their days with the Captain, while Caroline travels back and forth to the mainland to receive her expensive private music lessons. Louise is shocked one afternoon when, returning a stray cat to the neighbor’s house, she finds her neighbor, Auntie Braxton, passed out on the kitchen floor. With the Captain’s help, Louise is able to alert her father, who arranges for Auntie Braxton to recover from her stroke on the mainland. A few days later, a giant storm hits Raff, damaging Louise’s home and completely decimating the Captain’s. With nowhere else to go, the Captain moves in with the Bradshaw family. While taking the Captain out on her skiff to survey the damage, Louise surprisingly finds herself explosively attracted to the seventy-year-old man, and it is with a mixture of shame, excitement, and awe that she welcomes him into her home.

The Captain only stays with the Bradshaws for three days before moving into Auntie Braxton’s home to repair the damage while she recovers on the mainland. Rather than move out when Auntie Braxton is released, the Captain marries her, shattering Louise’s heart. Louise is unable to control her emotions, lashing out at everyone around her, most notably Caroline. When Call is drafted for the war and Caroline is sent to a prestigious music college, only Louise is left on the island, to work silently alongside her father on the crab boat. Louise withdraws from her religion, all social interactions, and her belief in love. Her parents begin to worry about her emotional state, and with great effort, convince her to leave the island and attend midwifery school. The novel ends with Louise moving away from Raff for good, moving to the mountains, and delivering a set of twins eerily similar to her own delivery, which brings the story of her relationship with Caroline full-circle.

More summaries and resources for teaching or studying Jacob Have I Loved.

Jacob Have I Loved from BookRags. (c)2022 BookRags, Inc. All rights reserved.