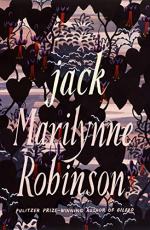 Marilynne Robinson
This Study Guide consists of approximately 39 pages of chapter summaries, quotes, character analysis, themes, and more - everything you need to sharpen your knowledge of Jack.

This detailed literature summary also contains Quotes and a Free Quiz on Jack by Marilynne Robinson.

The following version of this book was used to create the guide. Robinson, Marilynne. Jack. Farrar, Straus and Giroux, 2020.

The first section of the book recounts a conversation between Jack Boughton, a white outsider and former inmate, and Della Miles, a black schoolteacher from a well-respected Memphis family, in a cemetery late at night. They discuss questions of faith, existence, and meaninglessness, sharing family memories and deeply personal thoughts along the way. When they hear someone coming, Della tells Jack that she will leave a plant and book in her window to signal to Jack that things are going well.

Jack realizes that he could have helped Della leave the cemetery, and worries that he harmed her by not doing so. As dawn arrives, Jack tells her that they must separate so that no one catches them together. The guard scolds Jack for bringing a black girl into the cemetery.

In an effort to reform himself, Jack finds a job in a shoe store. As he works, he imagines that Della is there. One night, while drunk, he visits Della at her house, but is sure to leave before sunrise. Della’s aunt visits and asks Jack to stop seeing Della. After this encounter, Jack again reconsiders his life and thinks about the first time that he met Della.

He sees her again for dinner, where he realizes that he is in love with her. However, debt collectors find him while at dinner and hit him, causing him to bleed. He escapes to a cemetery in Bellefontaine, where a man named Bradshaw asks him to take his uniform and do his job for him. Jack uses Bradshaw’s money to pay his rent. He then lands a new job at a dance studio.

One Sunday, Jack takes his hat off in front of a black church, and a man drops a dime into it. He joins the church but worries that Della will find out that people thought he was a charity case. He begins to visit the Reverend Samuel Hutchins of the church for advice, but the minister does not approve of his interracial relationship. Jack and Della informally marry, but Reverend Hutchins refuses to bless their marriage.

Della writes Jack a letter saying that her sister Julia has come to visit, and invites him over. Julia tells Della and Jack that their relationship has ruined the family and begs them to end it. Julia leaves, but Della remains steadfast in her resolve to be with Jack. Jack temporarily decides to leave Della alone for her own good, so that she can keep her family and teaching job, and leaves for Chicago.

However, he eventually misses Della and decides to travel to Memphis to find her. Della reveals to Jack that she is pregnant. While Della’s mother invites him to stay for dinner, Della’s father makes it clear that he cannot accept Jack as a member of the family because of what that would do to the black race. He offers him money to return to St. Louis, and Della tells her father she plans to leave with him. The novel ends as the two of them board a bus together.

More summaries and resources for teaching or studying Jack.