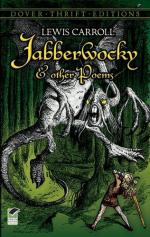 "Jabberwocky" is probably Carroll's most well-known poem. It is the first of many nonsense poems set into the text of the beloved English novel Through the Looking-Glass, published in 1872, six years after the more commonly known Alice's Adventures in Wonderland. Because the poem employs conventional structures of grammar and many familiar words, however, it is not "pure nonsense." In fact, while both books were composed for the ten-year-old Alice Liddell, it is generally accepted that Carroll's studies in logic firmly ground the thought beneath the imaginative works, so that adults find as much to appreciate in the novels and poetry as children. The importance of "Jabberwocky" as a central focus of meaning for the novel is indicated by Carroll's intention that the drawing of the Jabberwock should appear as the title-page illustration for Through the Looking-Glass.

In the novel, Alice goes through a mirror into a room and world where things are peculiarly backward. She finds a book in a language she doesn't know, and when she holds the book up to a mirror, or looking-glass, she is able to read "Jabberwocky," a mock-heroic ballad in which the identical first and last four lines enclose five stanzas charting the progress of the hero: warning, setting off, meditation and preparation, conquest, and triumphant return. The four lines that open and close the poem were published originally in 1855 as Stanza of Anglo-Saxon Poetry. It is this stanza that Humpty Dumpty, whom Alice meets shortly after reading the poem, takes pains to explicate. While the meaning of the poem is obscured by its nonsense elements, and general interpretations widely vary, Humpty Dumpty's explication is certainly much less helpful in discovering meaning in "Jabberwocky" than Alice's initial response:

"Somehow it fills my head with ideas—only I don't exactly know what they are! However, somebody killed something: that's clear, at any rate—"