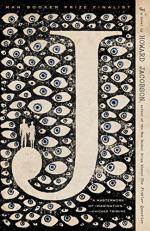 Related Topics
The Finkler Question
Shylock Is My Name

Howard Jacobson
This Study Guide consists of approximately 41 pages of chapter summaries, quotes, character analysis, themes, and more - everything you need to sharpen your knowledge of J.

This detailed literature summary also contains Quotes and a Free Quiz on J: A Novel by Howard Jacobson.

Note: Due to the structure of this novel, this study guide is divided into sections according to page numbers. This study guide specifically refers to the 2014 Hogarth/Random House First Paperback Edition.

“J” is a dystopian romance novel by Howard Jacobson. The story occurs decades in the future. Kevern lives in a cottage on the sea cliffs near a small village called Port Reuben, where he works with wood. He is introduced to the much younger, beautiful Ailinn one day. The two quickly fall for one another, begin a passionate romance, and move in together. As their romance unfolds, their pasts are also revealed to the reader.

Kevern knows only a little about his own past. He knows his mother and father were first cousins, that his father was much older than his mother, and that the two seemed to have moved to Port Reuben for no particular reason. He knows that his parents valued privacy, kept to themselves, and raised Kevern to be the same way. He suspects it has to do with something referred to as WHAT HAPPENED, IF IT HAPPENED. He also knows that his grandparents, especially his grandfather, were incredibly intelligent. Much of everything else largely remains a mystery.

Ailinn, on the other hand, has been raised by the nuns of Saint Brigid’s Convent and Orphanage. Ailinn’s mother was previously raised by the nuns there, after her grandmother went in search of her own parents. Her parents had gone missing during the early years just after WHAT HAPPENED, IF IT HAPPENED. Ailinn has been raised through her mid-teens by Esme, an elderly woman who has taken a special interest in Ailinn.

At the same time, Detective Inspector Gutkind has come to Port Reuben to investigate a triple murder. He and others suspect that the passions of people, long repressed by the government which strives for harmony, are resurfacing in violent ways as a result of being bottled up for so long. Nevertheless, he does his job as he can. Gutkind is also suspicious that WHAT HAPPENED, IF IT HAPPENED, never really happened at all. He has done quiet research into the affair. He has not been able to find mass graves or evidence to corroborate the official version of events that led to the radical reworking of society. Gutkind himself is ultimately murdered.

WHAT HAPPENED, IF IT HAPPENED, is vaguely spoken about in bits and pieces through the novel; but, it is Gutkind who figures things out shortly before his death. A minor crisis of some kind was exaggerated to turn the public against the Jews. The Jews were attacked and either driven out or driven into hiding. For decades, the people of the country were coached into always apologizing, never remembering the past, never being angry, emasculating men, and denying their passions.

The present generation of leaders, including Esme, seek to undo the sins of the past by helping the Jews to reemerge as a people. Esme hopes that Ailinn and Kevern will have a child to begin the process of reconstituting the Jewish people. Ailinn becomes pregnant by Kevern, but Kevern wants nothing to do with it, because he has already lost too much and because he thinks he is already lost. He commits suicide, which worries Ailinn because it means her baby will come into the world in tragedy and anger. Esme contends this is just what humanity needs –passion.

More summaries and resources for teaching or studying J: A Novel.