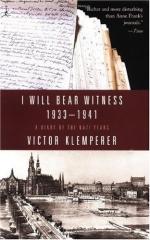 Victor Klemperer
This Study Guide consists of approximately 75 pages of chapter summaries, quotes, character analysis, themes, and more - everything you need to sharpen your knowledge of I Will Bear Witness.

From the beginning of the diary, Klemperer expresses profound disillusionment with Germany and with his own life. He is disheartened at the way Hitler has assumed power and at how the German people welcome him and believe what he tells them.

On May 13, 1934, Klemperer expresses his disappointment with his fellow Germans:

The masses let themselves be talked into believing everything. If for three months all the newspapers are forced to World War, then the masses will believe that it really did not happen.

Klemperer finds the Nazi regime to be "un-German," and he is disturbed by the ways he sees people in his own circle of friends and colleagues changing to suit the regime.

Klemperer is tormented by his deep love of his country and his complete powerlessness to save it. On March 20, 1933, he writes,

I think it is quite immaterial whether Germany is a monarchy or a...

More summaries and resources for teaching or studying I Will Bear Witness: A Diary of the Nazi Years, 1933-1941.