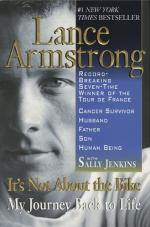 It's Not About the Bike Summary & Study Guide

It's Not About the Bike Summary & Study Guide Description

It's Not About the Bike Summary & Study Guide includes comprehensive information and analysis to help you understand the book. This study guide contains the following sections:

This detailed literature summary also contains Topics for Discussion and a Free Quiz on It's Not About the Bike by Lance Armstrong.

Lance Armstrong is know for his accomplishments on the bike as repeat winner of the Tour de France. But out of public view, Lance overcame struggles far greater than any mountain in France. Lance is also a cancer survivor. Lance shares stories normally kept very private. He shares the difficult start he had in life being raised by a teen mother without any support from his biological father who disappears from Lance's life when he is two. Lance shares that his stepfather is somewhat abusive and a liar.

Lance struggles as a young boy to fit in among the football town when he has no skills at the sport whatsoever. But through that challenge, Lance begins entering and winning triathlons, which is the precursor to bike racing. Lance discusses how at first he rides a bike just to feel free, like he could ride away from his stepfather and the town he does not fit in. But it becomes more than that to him. It is a passion. A way of life. However, it becomes a life threatened.

Lance is diagnosed with testicular cancer. It has become stage 3 cancer, having spread to his brain and lungs. While doctors continue to provide treatment options and give as much hope as possible, the fact is that he has a very low chance of survival and will most probably be left sterile. Lance takes on the challenge of cancer like he would tackle a mountain stage. After painful and agonizing chemotherapy treatment and brain surgery, Lance starts the slow ride back to racing. At first, Lance struggles with surviving cancer. In fact, he discusses giving up racing altogether, believing he just cannot do it. The cancer is gone, but the fear of it returning is too much for Lance at times. His racing team does not have much faith in him. They threaten to opt out of his contract. Lance does try a comeback, but it does not go like he would have dreamed. In fact, he ends up quitting in the middle of a race.

Eventually, Lance commits to racing again and joins the US Postal Team. He sets his goal on winning the Tour de France. He and Kik make a goal of becoming parents via in-vitro fertilization using sperm Lance froze before chemotherapy left him sterile. Through dedication, they overcome obstacles. Both accomplishments happen successfully. They become parents to a son named Luke, and Lance shares how he won the back-to-back Tour de France races in 1999 and 2000.

Lance also shares his new passion for starting a cancer foundation and starting the Ride for the Roses Cancer fundraiser. As a cancer survivor, Lance is forever changed. He wants to share that with others who lives are affected by cancer. The personal stories he shares include many examples of how those whose lives or loved ones are affected by cancer become like one big support group who can understand and support each other when others cannot.