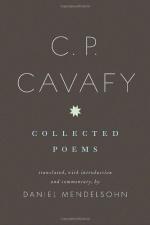 Constantine P. Cavafy
This Study Guide consists of approximately 34 pages of chapter summaries, quotes, character analysis, themes, and more - everything you need to sharpen your knowledge of Ithaka.

The first version of "Ithaka" was probably written in 1894. Cavafy revised the poem in 1910, and it was first published in 1911. The first English translation was published in 1924, and there have been a number of different translations since then. The poem can be found in Cavafy's Collected Poems, translated by Edmund Keeley and Philip Sherrard, edited by George Savidis, Princeton University Press, 1980.

"Ithaka" is an unrhymed poem of five stanzas that employ conversational, everyday language. The narrator, probably a man who has traveled a lot, addresses either Odysseus, the hero of Homer's epic poem the Odyssey, or an imaginary modern traveler or reader. The narrator tells the traveler that what is really important is not Ithaka, the island home that was the goal of Odysseus's years of wandering, but the journey itself. It is the journey that must be fully enjoyed at every moment, using all the resources of senses and intellect, because the goal itself is likely to be disappointing.

Cavafy enjoys a reputation as one of the finest of modern Greek poets. "Ithaka" is one of his bestknown poems and is considered to express his outlook on life.

More summaries and resources for teaching or studying Ithaka.

Ithaka from Gale. ©2005-2006 Thomson Gale, a part of the Thomson Corporation. All rights reserved.