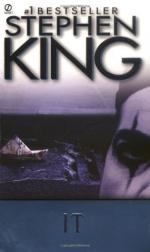 Get It from Amazon.com
View the Study Pack
View the Lesson Plans
Study Guide
Order our It Study Guide

Stephen King
This Study Guide consists of approximately 90 pages of chapter summaries, quotes, character analysis, themes, and more - everything you need to sharpen your knowledge of It.

Bill makes a newspaper boat for George on the last day of a record storm. George sails the boat in the gutter and loses it down a drain. George attempts to retrieve the boat and finds a clown in the drain. The clown grabs hold of Georgie's arm and rips it from his body, killing him.

George collected a group of pictures in an album before his death. After his death, Bill goes into George's room and looks through the album. One of the pictures in the album, a school photo of George, begins to move, winking at Bill. Later, Bill shows the album to Richie and the school photo is missing, but another picture of downtown Derry many years before George's death begins to move. When Bill tries to touch the picture, his fingers enter the photo and are cut.

More summaries and resources for teaching or studying It.

It from BookRags. (c)2022 BookRags, Inc. All rights reserved.