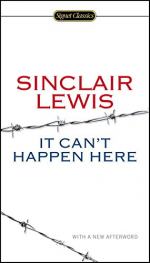 This detailed literature summary also contains Quotes and a Free Quiz on It Can't Happen Here by Sinclair Lewis.

The following version of this book was used to create this study guide: Lewis, Sinclair. It Can’t Happen Here. Signet Classics, 2014.

It Can’t Happen Here is a political novel set in the 1930s. The plot is told in a linear fashion and spans from 1936 to 1938. The novel was published in 1935. It is written in the past tense. The story follows the rise of a fascist regime in America, as Senator Berzelius “Buzz” Windrip is elected President of the United States and then uses military force to seize control of the government and the country. The story is told from the point of view of Doremus Jessup, a newspaper editor in the fictional town of Fort Beulah, Vermont.

The novel begins in 1936. Various politicians are running presidential campaigns, most notably incumbent President Franklin Roosevelt, Democratic Senator Berzelius “Buzz” Windrip, and presumptive Republican nominee Walt Trowbridge. In the town of Fort Beulah, Doremus Jessup follows the campaigns with trepidation, fearing Windrip to be a demagogue with harmful intentions. However, many of Doremus’ acquaintances in town support Windrip because of Windrip’s promises to end the Great Depression and make all Americans wealthy. Windrip’s campaign platform is also built on programs of oppression against women, black Americans, and Jewish Americans. With the endorsement of a group called the League of Forgotten Men, which is comprised of powerful politicians and business executives, Buzz Windrip is able to win the Democratic nomination and then the Presidency.

Soon after Windrip is inaugurated, he creates a new auxiliary to the United States Army called the Minute Men, who report only to him. Windrip uses the Minute Men to arrest the Supreme Court and most of Congress. Protests arise throughout the nation, and Windrip expands the Minute Men, using them to suppress the country’s protesters and dissidents. Windrip’s government takes over all finance and industrial operations in the country, and it hoards the majority of the country’s wealth for Windrip and his cronies. The government also enforces measures to oppress women, black Americans, and Jewish Americans. In Fort Beulah, Doremus is horrified by these developments, and he publishes a scathing anti-Windrip editorial in his newspaper, the Daily Informer. Windrip is arrested by the Minute Men, and government officials threaten to kill Doremus unless he only publishes pro-Windrip articles from then on.

Doremus decides to covertly publish an anti-Windrip newsletter called the Vermont Vigilance, which he distributes through a covert rebel network called the New Underground. Doremus is helped in this operation by friends and family. Eventually, the government finds out that Doremus is involved with the Vermont Vigilance, and he is arrested and sent to a concentration camp, which is one of many that the government has newly established across the country. At the concentration camp, Doremus is tortured and interrogated, but he resists giving up any information. Not long after, Windrip is ousted by his closest advisor, Lee Sarason, who is in turn ousted by General Dewey Haik. This turmoil among leaders weakens the government, and a mass rebellion begins to rise throughout the country. The rebels help Doremus escape imprisonment, and he escapes to Canada. He then volunteers to work as a spy for the rebellion, so at the end of the novel, he returns to America to help with the fight against the fascist regime.