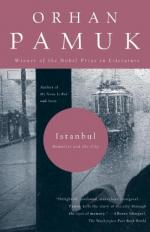 Orhan Pamuk
This Study Guide consists of approximately 26 pages of chapter summaries, quotes, character analysis, themes, and more - everything you need to sharpen your knowledge of Istanbul.

Istanbul is the city in Turkey where the author grew up and continues to live.

Pamuk Apartments is the building in which the author spent much of his childhood, living in one unit of the large building while other extended family members lived in others. He now lives in the same building again.

The Bosphorus is a river and major shipping lane that runs through Istanbul.

Dignitaries from the Ottoman Empire, called pashas, built wooden mansions in Istanbul, many of them along the banks of the Bosphorus. Most of the mansions have since burned or been destroyed to make way for apartment buildings.

Nisantasi is the section of Istanbul where the author spent much of his childhood, and is the location of the Pamuk Apartments.

Cihangir is a section of Istanbul where the author lived with an aunt and...

More summaries and resources for teaching or studying Istanbul: Memories and the City.

Istanbul: Memories and the City from BookRags. (c)2022 BookRags, Inc. All rights reserved.