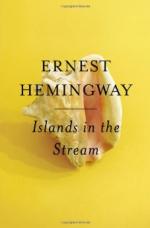 Islands in the Stream Summary & Study Guide includes comprehensive information and analysis to help you understand the book. This study guide contains the following sections:

This detailed literature summary also contains Topics for Discussion and a Free Quiz on Islands in the Stream by Ernest Hemingway.

Thomas Hudson lives in a strongly built house on the island of Bimini off the coast of Florida, the most western island in the Caribbean. The house sits on the highest point of land between the harbor and the open sea. Clear green phosphorescent water fills the view, and beneath that off-white sand, with palm trees near the house.

An artist who paints island scenes for a living, Thomas welcomes his three sons—Tom, David, and Andrew—when they come to visit for five weeks during the summer. Tom is the firstborn whose mother, Ginny Watson, is Thomas's first wife. His second former wife gave birth to the other two boys.

Shortly before the boys arrive, Roger Davis gets into a fight with an unsavory rich tourist. A former boxer, Roger easily beats the man to a pulp. The man later threatens Roger with a shotgun, but Roger again humiliates the man and he puts the gun away

A hammerhead shark nearly attacks David during a goggle-fishing trip to the reef near Bimini. Thomas tries to shoot the shark with a rifle but keeps missing. Eddy, one of Thomas's hired help, takes out the shark with a machine gun. On another fishing trip, David hooks a very large swordfish that takes most of the day to fight. Upon bringing the swordfish to the boat, the hook lets go and David loses his trophy. The boys, Thomas, and his friends play a trick on tourists, one of whom turns out to be a family friend. After the boys leave, Thomas receives word that they, along with their mother, have been killed in a car wreck.

World War II breaks out and Thomas is conscripted into serving as the skipper of a submarine-hunting boat. During a break between missions, Ginny Watson visits Thomas in Cuba. They make love, after which Thomas breaks the news that their son Tom has died in the war.

Thomas and crew discover a key where a group of German sailors who had lost their submarine have killed everyone and burned down their shacks. Thomas tries to think like a German sailor and guesses correctly as to their general course. Thomas and crew go from key to key and find evidence that they are on the right trail. On one island, a dying German soldier is discovered and brought on board for questioning. The man refuses to talk and is too close to death to be useful. He dies and the crew buries him on the key where he was found. At another key, they find one of the boats that the Germans had taken from the massacre key and abandoned. A subsequent key yields the second boat and a German sailor who kills one of the crew members before Thomas kills him. A big shootout happens at the last key, where Thomas and crew kill all the Germans. Three German bullets rip into Thomas during the fight and may have caused fatal injuries. One of the crew members tells Thomas that he has never understood those who love him.

Islands in the Stream from BookRags. (c)2022 BookRags, Inc. All rights reserved.