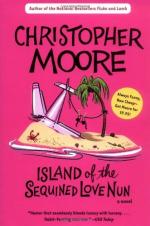 Plot Summary
+Chapters Summary and Analysis
Part One, The Phoenix, Chapters 1-5, The Cannibal Tree, I Thought This Was a Nonsmoking Flight, And You Lost Your Frequent Flyer Miles, Pinnacle of the Pink Pyramid, Our Lady of the Fishnes Stockings
Part One, The Pheonix, Chapters 6-10; Who's Flying This Life, Travel Tips, The Humiliation of the Pilot As a Passenger, Cult of the Autopilot: A History Lesson, Coconut Telegraph
Part One, The Pheonix, Chapters 11-15: Paging the Goddess, Friendly Advice, Out of the Frying Pan, Espionage and Intrigue, The Navigator
Book One, The Pheonix, Chapters 16-20: And Now the Weather Report, Foul-Weather Friend, Land Ho, Water, Water, Leadership's a Bitch
Bood One, The Pheonix, Chapters 21-22: How the Navigator Got from There to Here, Finding Spam
Part Two, Island of the Shark People, Chapters 23-27: Deus Ex Machina, Valhalla: From the Runyones, We Ask the Gods for Answers and They Give Us Questions, Swing Time, Girl Talk
Part Two, Island of the Shark People, Chapters 28-32: Chose Your Own Nightmare, Safe in the Hands of Medicine, Fashion Statements, Revenge:Sweet and Low in Calories, The Missionary Position
Part Two, Island of the Shark People, Chapters 33-37: Chasing the Scoop, Water Hazard, Free Press, My Ass, Return to the Sky, Bombs and Bribes
Part Two, Island of the Shark People, Chapters 38-41: Native Customs, Showtime, Unfriendly Skys, What's a Kidney?
part Three, Coconut Angel, Chapters 42-46: Bedfellows, Boiling the Puppets, Revealed: The Perfect Couple, Confessions Over Tee, Beans and Succubus
Part Three, Coconut Angel, Chapters 47-51: Grand Theft Aircraft, Too Many Guns, The Bedside Manner of Cannibals, Don Quixote at the Miniture Golf Course, Where Losers Flourish
Part Three, Coconut Angel, Chapters 52-56: Don't Know Much About History, How the Shark People Got Their Name, Selling Tucker, Pay No Attention to That Man Behind the Computer, Escape
Part Three, Coconut Angel, Chapters 57-61: West with the Bat, Malink's Song, Call in the Cavalry, Meanwhile, Back at the Ranch, Roundhouse Aloha
Part Three, The Coconut Angel, Chapters 62-67, Epilogue: Like Clockwork Spies, No Frills, Deliverance, Down to the Promised Land, If They'd Only Had Her at the Alamo, The Cannibal Tree Revisited, Epilogue
Free Quiz
Characters
Objects/Places
Themes
Style
Quotes
Topics for Discussion
Order our Island of the Sequined Love Nun Study Guide

Christopher Moore
This Study Guide consists of approximately 48 pages of chapter summaries, quotes, character analysis, themes, and more - everything you need to sharpen your knowledge of Island of the Sequined Love Nun.

This detailed literature summary also contains Topics for Discussion and a Free Quiz on Island of the Sequined Love Nun by Christopher Moore.

The island of the Sequined Love Nun, by Christopher Moore is the hysterical tale of the redemption of Tucker Case, a self-involved pilot who lives life to the fullest until finally realizing that his life is quite empty. Through a series of mishaps and with the help of a cross-dressing navigator, a talking fruit bat and the ghost of a World War II bomber pilot, Tucker finally turns his life around and becomes a decent man.

The novel begins with Tucker happily assisting a prostitute in joining the mile high club on the private jet he pilots for Mary Jean Cosmetics owner, Mary Jean Dobbins. While his mind and body are otherwise occupied, Tuck does not realize the plane is low on fuel and crash lands at an airport in Seattle. Before the plane slams to the ground a voice asks Tuck if this is how he wants to die. Tuck survives, though the appendage that he has spent most of his adult life thinking with, his penis, is severely damaged in the crash. While recovering Tuck learns from his friend Jake that not only is he going to be fired, but likely prosecuted, and has lost his pilot's license. With nowhere to turn, Tuck accepts a job on the remote island of Alualu, flying a jet for a missionary, Sebastian Curtis.

After more mishaps and strange interventions that keep Tuck on task, Tuck arrives at Alualu with the help of his new friend, Kimi, the cross-dressing navigator and his pet fruit bat, Roberto. Their arrival on the island introduces the two men to Sarapul, an old cannibal and member of the native tribe on the island, the Shark People. The chief, Malink's announcement that he has dreamed that Vincent says a pilot will arrive, sends the natives scurrying to take Tuck to the compound of Sebastian and Beth Curtis. Once there, Tuck is cared for medically by Dr. Curtis and settles in. Shortly thereafter Tuck makes his first flight for the Curtis's to Japan, a quick trip with Beth Curtis carrying a small cooler. Tuck does not really question this, as the money is good and he feels it is none of his business. Things change for Tuck when he begins to get to know the people on the island while searching for Kimi, trying to discover if his friend is alright.

Tuck discovers that the Curtis's are using the Shark People to harvest their kidneys and sell them on the black market in Japan. The couple is able to accomplish this by using the native's beliefs against them. Years ago when Malink was a boy, a B-26 bomber piloted by Vincent Bennidetti had landed on the island and the young boy, chief because his father and brothers have been killed by the Japanese, believes the man to be a god. Vincent had taken the boy under his wing for his short stay on the island and had promised to return, but had been shot down and killed shortly thereafter. Beth Curtis, dressed as the Sky Priestess, the pin-up girl painted on the side of the bomber, delivers messages to the natives, supposedly from Vincent, and selects the pilot's 'chosen.' These natives, matches through Sebastian's data base, then have a kidney harvested and the couple sells it.

Tuck also discovers that the mysterious voice he sometimes hears, and the figure he sometimes sees, is the ghost of Vincent. The pilot, unable to return himself, has arranged for Tucker to save his friends on the island. This is more difficult than it needs be, as Tuck is at times too selfish to recognize that others might be unable to help themselves. Eventually, however, Tuck manages to escape from the island, taking a young girl, Sepie with him. Sadly, Kimi is killed as they try and escape. Arriving in Hawaii after several days at sea, Tuck tries to convince the police and FBI to help, to no avail. Unsure where to turn, Tuck calls Mary Jean Dobbins, who is thrilled that Tuck has turned his life around and arranges to get the natives off the island.

With more intervention from Vincent and the discovery of the truth by the Shark People, Tuck is able to fly the natives off the island to safety. The Japanese business men that Sebastian and Beth Curtis had been dealing with turn on them and leave them stranded on Alualu, where they fall into the hands of Sarapul, the old cannibal. Tuck winds up in the Cayman Islands with Sepie, the young native woman, happy and in love.