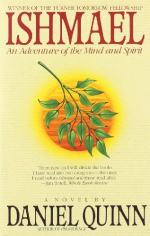 Ishmael: An Adventure of the Mind and Spirit Summary & Study Guide

Daniel Quinn
This Study Guide consists of approximately 62 pages of chapter summaries, quotes, character analysis, themes, and more - everything you need to sharpen your knowledge of Ishmael.

Ishmael: An Adventure of the Mind and Spirit Summary & Study Guide Description

Ishmael: An Adventure of the Mind and Spirit Summary & Study Guide includes comprehensive information and analysis to help you understand the book. This study guide contains the following sections:

This detailed literature summary also contains Topics for Discussion and a Free Quiz on Ishmael: An Adventure of the Mind and Spirit by Daniel Quinn.

Ishmael: An Adventure of the Mind and Spirit shows an enormous educated, telepathic gorilla, Ishmael, mentoring an idealistic but somewhat dense middle-aged writer. Ishmael helps him understand how the majority of humankind is enacting a story that will destroy the world, while a tiny minority lives in communion with the community of life and can point to a brighter future.

Ishmael, an enormous, educated, telepathic gorilla, agrees to mentor the unnamed narrator in saving the world. He begins with the familiar and clearly perverse story of the Nazis, sweeping all Germans, regardless of politics or economic situation, along in their propaganda and education program. He then states boldly, "Mother Culture," the voice of "Taker" culture, uses the same techniques to inculcate her own themes into every member of "civilized" peoples from birth. Ishmael maintains, however, there is another story of humankind, but "Leaver" can be appreciated only once the narrator understands how the Takers have brought the world to where it is. Mother Culture tells man's scientific analysis of creation and evolution in mythical terms. Takers believe they must rule nature and to rule it must first conquer it, for nature will not surrender passively. Their morality is artificially truncated by the belief one cannot know how to live and a too-facile reliance on prophets to instruct them.

When the narrator fails to see humans do not need prophets to tell them how to live - fails to see an immutable law in nature that shows how they should live, Ishmael uses the undisputed laws of gravity and flight to show how Taker culture is in freefall and few are truly worried about the inevitable impact. Ishmael follows with a shocking picture of happy cannibals legally dining on one another to help the narrator understand why the Takers' views on the food chain are fundamentally wrong and destructive. This theme will be developed at length going forward as the alternative - agriculture - is critiqued. Ishmael cites Peter Farb's thesis that food supply and population size rise and fall in direct relation to one another and that this balancing occurs in a global perspective. The problem can be corrected by dropping the Taker party line, but if they refuse, human extinction is inevitable.

By contrast, the Leavers' story is far older and still successful, whenever Takers do not stamp it out. Genesis 1-4 preserves an ancient story the Hebrews - a Taker people -adopt without fully understanding and incorporate into their mythology, changing only "the gods" to "God." The Hebrew narrative shows signs of a nonagricultural people striving to understand why aggressive neighbors are successfully invading, killing, and displacing them to open new farmlands. Only positing a Leaver polemic makes full sense: in seeking Life, they do whatever they want, regardless of consequences for others.

Ishmael is evicted and disappears, but the narrator finds him, ailing, in a freak show. Only reluctantly does Ishmael resume the training, taking up how as Takers lose touch with ancient culture and wisdom they need to be told how to live, while contemporary Leavers have no doubts, being firmly grounded in well-tested, localized traditions. Leavers, Ishmael holds, are "the original affluent society," rather than, as Leavers insist, always teetering on the brink of starvation. The narrator comes to appreciate how humanity might be remembered a billion years hence as the species that first evolves self-awareness and intelligence - and has the grace to allow other species to do the same. Ishmael seeks an optimistic way for his pupil to present his message to others, but the narrator has learned to be defeatist. About to be cut loose by his ailing mentor, the narrator sees the task as daunting as that faced by St. Paul, but realizes that everything must start small, and doing nothing only plays into the onrushing destruction. Before the narrator can rescue Ishmael from the carnival, the great ape dies of pneumonia and is unceremoniously cremated by the county, along with roadkill.

More summaries and resources for teaching or studying Ishmael: An Adventure of the Mind and Spirit.

Ishmael: An Adventure of the Mind and Spirit from BookRags. (c)2022 BookRags, Inc. All rights reserved.