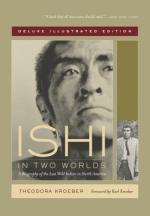 Theodora Kroeber
This Study Guide consists of approximately 26 pages of chapter summaries, quotes, character analysis, themes, and more - everything you need to sharpen your knowledge of Ishi.

Following the great slaughter of many of the Yana and Yahi People and the desecration of their villages by the white settlers, the few survivors, including Ishi’s family, settle into a hidden village which they name Tuliyani. Tuliyani is located along Yuna Creek, south of Waganupa (Mount Lassen), and east of the current city of Red Bluff, California.

After the arrival of more saldu near the village of Tuliyani, Ishi and his People relocate to a cave set on the steep side of a canyon, named Wowunupo, which means “Grizzly Bear’s Hiding Place.” Their village at Wowunupo is discovered in 1908 by the work crew of a power company. Following the death of Ishi’s mother, he wanders out of the forest and is discovered near a slaughterhouse in Oroville in 1911.

Black Rock is a secret lookout point where Ishi goes to watch...

Ishi: Last of His Tribe from BookRags. (c)2022 BookRags, Inc. All rights reserved.