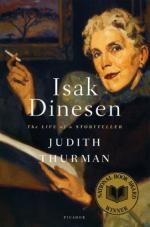 Isak Dinesen: The Life of a Storyteller Summary & Study Guide

Isak Dinesen: The Life of a Storyteller Summary & Study Guide includes comprehensive information and analysis to help you understand the book. This study guide contains the following sections:

This detailed literature summary also contains Topics for Discussion and a Free Quiz on Isak Dinesen: The Life of a Storyteller by Judith Thurman.

Isak Dinesen, who was born on April 17, 1885 in Denmark, became a world renowned literary great before she died on September 7, 1962, also in Denmark. Isak Dinesen is actually one of her pennames, having been born Karen Christenze Dinesen. Of her many stories, the most well known today is Out of Africa. She considered herself a storyteller rather than a writer of novels. Although her stories varied in length, most can be considered within the range of a short story.

She lived in Africa for several years, where she fell in love with Denys Finch Hatton. She used this experience as the basis for Out of Africa. The Kenyan coffee plantation failed, after which she returned to Denmark. World War Two broke out, and during the German occupation of Denmark, Dinesen helped thousands of Jews escape to Sweden.

During her literary career, she produced several volumes of stories that became popular in the United States, France and Italy. She also published many of her short stories in the US magazine industry. Although well accepted elsewhere, the Danish literary world gave her work negative criticism while she lived. She was later accepted as a highly influential writer in Danish literature, and part of the delay had to do with Dinesen's preference to write her stories first in English. She was also fluent in French and had conversational knowledge of several European languages.

She had been nominated for the Nobel Prize in literature several times but never won. In her late life, she visited New York City and instantly became a celebrity there. Due to her failing health, she was known as an extremely thin woman who seemed to be a living relic of the Romantic period in literature. People flocked to her performances in which she would tell her stories verbatim as they had been published. She could do this because all of her stories were worked out in her imagination before she wrote them out on her old typewriter. In later life she had to dictate the new stories to her secretary.

Isak Dinesen lived her life as she saw fit while ignoring the conventional expectations of her time. She was in this way an early feminist, although the primary struggle was to be recognized to be as worthy as a man. She embraced hunting as a favorite activity in Africa, a sport that no other colonial women attempted. She also ran the coffee plantation and accepted the native Kenyans as equals in humanity, not inferiors as was the common racist attitude of the day.

Dinesen worked on her literary projects up to a few days before her death and left an extensive catalog of literary accomplishments. Among her unfinished works was a serious novel that would have had over a hundred characters, and some of her works have been published posthumously. Despite having contracted syphilis from her first and only husband at a young age and having many other health problems, she lived well into her seventies.

Isak Dinesen: The Life of a Storyteller from BookRags. (c)2022 BookRags, Inc. All rights reserved.