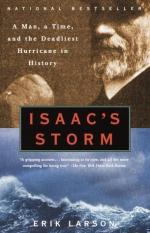 Isaac's Storm: A Man, a Time, and the Deadliest Hurricane in History Summary & Study Guide

Isaac's Storm: A Man, a Time, and the Deadliest Hurricane in History Summary & Study Guide Description

Isaac's Storm: A Man, a Time, and the Deadliest Hurricane in History Summary & Study Guide includes comprehensive information and analysis to help you understand the book. This study guide contains the following sections:

This detailed literature summary also contains Topics for Discussion and a Free Quiz on Isaac's Storm: A Man, a Time, and the Deadliest Hurricane in History by Erik Larson.

The novel "Isaac's Storm" covers the destructive impact of the Galveston hurricane, including all of the events that lead up to the hurricane's arrival. The hurricane itself is analyzed, as well as the impact the actions of a few individuals had on the overall destruction caused by the storm.

The Galveston hurricane of 1900 was one of the most traumatic and destructive weather events of the time. However, in an odd twist, the hurricane and its destructive impact was a direct result of the thought processes at the time. The turn of the century boasted men who were swollen with pride. They were excessively proud of their advanced technology, new thought processes, and instruments that were changing lifestyles and society for the better. Everywhere you looked, there was a reason to feel proud and patriotic.

Unfortunately, the cloud of all this ego and pride was that the limitations and hindrances to problems were not analyzed. Galveston, for one, was in a race against Houston to become the most successful Texas town. Galveston was prosperous; it was pretty. However, it was located right on the coast and had geographic features that made it more like a bowl of land next to the mighty Gulf Coast, enabling flooding. These geographic features, wholly ignored by Galveston residents and meteorologists, would prove to be fatal during the days of the hurricane.

Enter a man named Isaac Cline. A meteorologist with a medical degree and a strong understanding of storms and the Law of Storms, Isaac had a high opinion of himself. He thought he was one of the best meteorologists in the area and came from a time when men thought they could control Mother Nature. There was talk of getting rid of hail with cannon shot and making it rain through well-planned forest fires. Despite its coastal position and geographic features, Cline published an article stating that a hurricane in Galveston was an impossibility.

Isaac lives in Galveston with his pregnant wife Cora and their three daughters. In addition, his brother Joseph lives and works with him at the Levy Building, recording and researching weather phenomena in the area. At the time, the Weather Bureau forbids the use of the words "hurricane" and "cyclone" and bans weather communications with Cuba, no matter how innocent they look. Isaac's superiors believe that despite their years of experience and accurate predictions, Cuba is trying to undermine the American Weather Bureau. It is their ignorance of Cuba's data that directly costs the lives of thousands in Galveston.

The story covers Isaac's actions before, during and after the hurricane, but incorporates other accounts of the hurricane from other Galveston residents as well. In this way, the story full covers the impact of the hurricane and all of its fatal destruction.

Isaac's Storm: A Man, a Time, and the Deadliest Hurricane in History from BookRags. (c)2022 BookRags, Inc. All rights reserved.