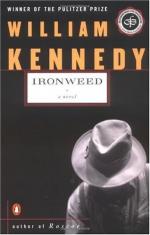 William Kennedy
This Study Guide consists of approximately 49 pages of chapter summaries, quotes, character analysis, themes, and more - everything you need to sharpen your knowledge of Ironweed.

Ironweed is the remarkable story of Francis Phelan, once a talented major league baseball player, husband, and father of three, who has fallen so far from grace that his home for the past twenty-two years has been the street. Author William Kennedy takes us into the mind and heart of a homeless vagrant and explores the situations which have brought Francis to this heartbreaking station in life. Francis' denigration of himself and his common-law wife, Helen, makes for a disturbing read, and yet the novel is ultimately uplifting. It begins not with Francis' fall from grace, but rather with the day on which he begins his journey towards redemption.

It is the night before Halloween in 1938, and Francis, who left his family for good back in 1916, is beginning to think about all that he's left behind. This is a sea change for Francis, who has perfected the art of forgetting. His life has become so base and desolate that he does not even wish to remember what happened yesterday, much less explore the painful memories of the events which led him to take flight from his home in the first place. He is helped along in his recollections by the appearance of ghosts from his past. He sees and converses with men he has killed, and men he's befriended or helped along the way. The ghosts act as Francis' conscience, which he has ignored for so long that it must manifest itself in the form of these apparitions. The novel's events take place over a period of only three days, in which Francis walks the streets of his youth and gradually comes to terms with the past he fled so long ago. By the end of the novel, Francis has, surprisingly, returned home to live with the wife and family he abandoned twenty-two years before. He has not, in the short space of three days, become a fully changed person, but the story ends on a hopeful note as Francis, given a choice to run away or to stay, chooses to stay for the first time in his adult life.

More summaries and resources for teaching or studying Ironweed.