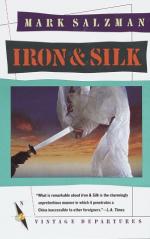 This detailed literature summary also contains Topics for Discussion and a Free Quiz on Iron & Silk by Mark Salzman.

Mark Salzman writes about his experiences as an English teacher in the Hunan Province of South Central China in his work, "Iron & Silk." The title represents two forms of martial arts where one form is harsh and muscular and the other is softer and gentler but just as effective. Mark's interest in China and its culture was sparked at an early age. At the age of thirteen, he enrolled in a Kung Fu school where he studied martial arts, calligraphy, and ink painting. Later in life, he continued his studies at Yale University, graduating Phi Beta Kappa, Summa Cum Laude with a major in Chinese Languages and Literature. After graduation, Mark and several other Yale graduates, accepted teaching positions in China.

Mark and his colleagues arrive together in the city of Changsha where the Hunan Medical College is located. The new arrivals will stay at the College where they will teach English. Mark is assigned to teach several different classes, which are comprised of medical students, teachers, and doctors whose knowledge of English range from nothing to near fluency. Mark enjoys his classes and learns many interesting and anecdotal incidents about China and its people and culture from his students.

Mark receives much support from the dedicated and knowledgeable people who he encounters at school and in the community. One of his biggest passions in life is martial arts. He has studied wushu, one of the many martial arts forms, for years in the United States. When he is China, in the birthplace of the art form, Mark feels blessed that he is able to receive instruction from world class experts. Mark learns that to be a true martial arts competitor, he must learn to develop his internal strengths that are referred to by the Chinese as "qi" and "gong fu." He also takes formal lessons from artisans who are experts in calligraphy, which is another passion that originated in his youth.

Beyond formal lessons, Mark learns about other strengths that the Chinese cultivate. They are dedicated and respectful people who are loyal to their friends and family. They disdain arrogance and shun any sign of disrespect. He learns of a people who will walk a hundred miles to repay a debt and encounters a felon who is respectful of his feelings. He befriends an old fisherman who feels so honored that Mark is his friend that he promises to buy him his own fishing boat if he agrees to live with him and his family.

The only negativity he encounters is the influences that the Chinese Communist Party is having on the people. He never blames the people for the propaganda they repeat. Instead he feels concern and is hurt that their pure natures are being compromised.

After two years, Mark heads back to the United States. He speaks of no regrets and attests to the increased admiration and respect he has for China and particularly its people.