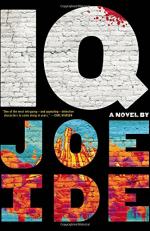 Joe Ide
This Study Guide consists of approximately 52 pages of chapter summaries, quotes, character analysis, themes, and more - everything you need to sharpen your knowledge of IQ.

This detailed literature summary also contains Quotes and a Free Quiz on IQ: A Novel by Joe Ide.

The novel starts in 2013. Boyd, a minor character, is sitting in his car and watching a school. We learn that Boyd is a pedophile, and that he is planning on kidnapping a girl. The omniscient narrator leaves Boyd and introduces us to the protagonist, Isaiah “IQ” Quintabe. Deronda, an old friend, comes over looking for a favor, but Isaiah is busy searching for a new case on his email.

Isaiah takes Deronda home, and on the way he gets a phone call about a case from his old friend Dodson, but Isaiah is not interested in reigniting their friendship. Isaiah stops to get a present for his friend Flaco. By chance, he witnesses Boyd kidnap a young girl. Isaiah chases after Boyd, who takes the girl onto his boat and heads down the river to the open sea. Isaiah takes a grenade launcher out of his trunk, blows up the boat, saves the girl, and leaves Boyd for the police. Isaiah goes to visit Flaco, who is mentally-impaired and on the verge of turning eighteen, and Isaiah decides that he wants to buy a condo for the boy. He goes home and calls Dodson back.

In 2006, Isaiah’s older brother and caretaker, Marcus, was hit by a car and killed. In order to keep the apartment, Isaiah asked Dodson, a practical stranger from school who happened to be homeless, to move in. Dodson agreed, and the boys started living together.

Back in 2013, Isaiah meets up with Dodson and they go to the rapper Calvin Wright’s mansion where they meet Calvin, his personal assistant Anthony, his bodyguards Bug and Charles, and his record producer Bobby Grimes. A hitman sent an oversized pit bull into Calvin’s house to kill him, and now the rapper wants proof that his ex-wife, Noelle, was behind the attack, so that he can go outside and record his new album. The omniscient narrator jumps back a month and shows the reader how Skip, a sociopath, was hired to kill Calvin, but the narrator does not inform the reader of who hired Skip.

Back in 2005, we learn that Dodson was a member of a gang, the Crip Violators, and he sold crack to make money. As the boys started to get to know one another, Dodson began to think that he could use Isaiah, who was smart and clever, in a scheme to make more money and quit selling crack.

In 2013, the narrator switches to Calvin’s perspective, and we learn that the rapper had fallen into a spiral of depression long before the dog was sent to kill him. Isaiah and Dodson search for clues in the backyard, and then Isaiah decides to visit his old boss, Harry Haldeman, at the animal shelter. Harry loves pit bulls, and he says that the dog that attacked Calvin must have been bred to be twice the size of a normal pit bull on purpose.

Back in 2005, Isaiah became obsessed with finding the person who killed Marcus. He quit school and his job, and focused on the hunt, but was unable to find the person. Dodson covered the rent, and suggested that Isaiah start thinking of other, nontraditional ways of making money.

In 2013, Harry makes a few calls and directs Isaiah to Blue Hills Pit Bulls, where Skip works and lives. Isaiah and Dodson go to the ranch in the desert and meet Skip. Isaiah discovers that Skip is the hitman, and then confronts Skip so as to provoke him into making a mistake before leaving. When they leave, Isaiah tells Dodson that either Bobby, Anthony, Bug, or Charles hired Skip.

Back in 2005, Isaiah and Dodson robbed Pet City together and get away with it. The next chapter is dedicated to Skip’s background and history, and the omniscient narrator shows us that Skip is furious with Isaiah for having discovered his secret, and so intends to murder him.

In 2013, Calvin burns his possessions in a bonfire on his patio. Bobby attempts to get Isaiah to tell Calvin everything is fine, but Isaiah refuses. Isaiah goes over his list of suspects and determines that Bug and Charles need Calvin financially, and Bobby needs Calvin to make a new record, so the obvious culprit is Anthony. But Isaiah believes he is missing something.

In 2005, Dodson and Isaiah continued to successfully rob a variety of businesses. But the two began to fight and argue over how to do things, and Dodson’s girlfriend, Deronda, moved into the apartment and added more tension. One night, Dodson took out a gun during a robbery, Isaiah threatened to quit if there was any violence, and Dodson threatened to shoot Isaiah if he quit.

In 2013, Skip sneaks into Isaiah’s house and tries to assassinate him. Isaiah escapes and goes to meet an old client, Blasé, with Dodson. Blasé explains that Calvin used to be part of a trio, along with Bug and Charles. Isaiah and Dodson break into their house, and discover that Charles is attempting to make a comeback album. Isaiah begins to suspect that Charles is behind the assassination attempt.

In 2006, Dodson and Isaiah had a huge falling-out when Dodson went behind Isaiah’s back and sold a bunch of their merchandise, along with some of Marcus’s much-loved tools. Isaiah moved out of the apartment, and when he went back to collect his things, Deronda told him that Dodson was going to rob Junior, the drug dealer he bought his drugs from, during a reup.

In 2013, Bobby tries again to get Isaiah to tell Calvin things are fine, and this time he offers him 20,000$. Isaiah refuses, and he and Dodson trick Skip into leaving his house so that they can kidnap his dog, Goliath, and use him as blackmail to find out who hired Skip. The plan falls apart, though, and Isaiah just barely saves Dodson from Goliath before Skip returns and the two must run away.

In 2006, Dodson robbed Junior dressed as a member of a rival gang. He was almost killed, but Isaiah came and saved him. A gang war started between the Crip Violators and the Locos, and in the process Flaco was shot and his parents were killed.

In 2013, Skip tricked Calvin into meeting him in a garage, but Isaiah figured out the plan and showed up to save Calvin. Skip almost shot Isaiah, but Dodson came and knocked Skip out from behind, saving Isaiah.

In 2006, Isaiah felt guilty about Flaco, so he started spending all his time with the orphan. He took a series of job that made him a good detective, and got his first case by chance. His first client spread the word about his abilities, and his career took flight.

In 2013, Skip is arrested and Calvin goes to rehab. Dodson cracks the case and realizes that Bobby Grimes tried to have Calvin killed so that he could sell his unreleased records and make a fortune, just like Tupac’s producer had done. Bug and Charles beat Bobby up and put him in the hospital. Dodson buys Flaco the condo and then gives Isaiah the money from robbing Junior. In the epilogue, Isaiah goes to the wreck-yard and finds the car that killed Marcus.

More summaries and resources for teaching or studying IQ: A Novel.