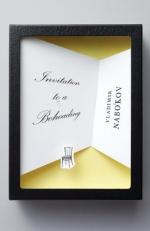 Invitation to a Beheading Summary & Study Guide includes comprehensive information and analysis to help you understand the book. This study guide contains the following sections:

This detailed literature summary also contains Topics for Discussion and a Free Quiz on Invitation to a Beheading by Vladimir Nabokov.

Cincinnatus C. is a prisoner, condemned to death and awaiting his beheading for a crime that he doesn't fully understand. Cincinnatus isn't condemned for doing anything; instead, he's condemned for being different from everyone else. That difference seems embodied in the strange, dream-like quality of the world he lives in, a world that seems conjured up by his own mind. At the moment of his beheading, Cincinnatus realizes the strange control he has over the world and dissolves his own cage and oppressors.

As the novel begins, Cincinnatus is sentenced to death and locked in a towering prisoner on top of a mountain. Cincinnatus has never fit in with the rest of the world. Even as a child, others could see that Cincinnatus's soul was "opaque," not "transparent" like everyone else's. Cincinnatus learns to hide his deficiency, and he becomes a kindergarten teacher and marries a woman, Marthe.

However, Marthe is unfaithful to Cincinnatus, and Cincinnatus begins to be less guarded around other people. He is detected as different and sentenced to death. His time in the prison is filled with impossible, dreamlike events. Cincinnatus insists on knowing the scheduled time of execution, but no one will tell him. He writes down his thoughts in a disjointed journal.

One of Cincinnatus's dearest desires is to see Marthe again, and he anxiously awaits her scheduled visit. However, instead of Marthe, he meets a fellow prisoner, M'sieur Pierre. Pierre says that he's in prison for planning to help Cincinnatus escape, but he is a pompous and obnoxious man, pretending sympathy and friendship. Meanwhile, Cincinnatus also meets Emmie, the twelve-year-old child of one of the prison officials.

When Cincinnatus finally meets with Marthe, she brings her whole family and all their furniture. He can't even have a single private word with her. After the visit, Cincinnatus begins hearing scratching noises, as if someone is tunneling toward him at night. At the same time, Emmie tells him that she is planning to help him escape.

Finally, Cincinnatus's execution is scheduled, but the night before there is a party for Pierre and Cincinnatus, with all the important local officials. The officials are all sick the next day, and the execution is put off again. Cincinnatus is taken by surprise when he's led away to be executed that afternoon. At the execution, Cincinnatus lays down on the cutting block. Then, he suddenly wonders why he is cooperating with this punishment. He gets up and walks away, as the world of his oppressors crumbles into nothingness in his wake. In the distance, he hears the voices of others like him.

Invitation to a Beheading from BookRags. (c)2022 BookRags, Inc. All rights reserved.