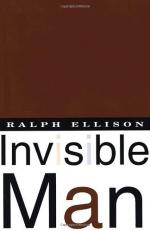 Ralph Ellison
This Study Guide consists of approximately 48 pages of chapter summaries, quotes, character analysis, themes, and more - everything you need to sharpen your knowledge of Battle Royal; or, The Invisible Man.

Blonde Who Strips And Is Chased By The Audience

Before the ten classmates fight, they are forced to consider a "magnificent blonde—stark naked." The white men menacingly watch as the young men tremble with fear, knowing that in the time they live, a Black man who demonstrates sexual interest in a white woman risks being lynched. The narrator's description of the woman objectifies her into a "kewpie doll" as he tries to express his contradictory feelings of lust and fear. As the woman dances, the white male audience grows increasingly rowdy until they are literally passing her around over their heads. Finally, the woman escapes and the "battle royal" begins.

Classmates At The Smoker

When the narrator shows up at the hotel, expecting to give his speech, he is grouped with nine of his fellow classmates, all of whom are African American. The main event at the "Battle...

More summaries and resources for teaching or studying Battle Royal; or, The Invisible Man.

Battle Royal; or, The Invisible Man from Gale. ©2005-2006 Thomson Gale, a part of the Thomson Corporation. All rights reserved.