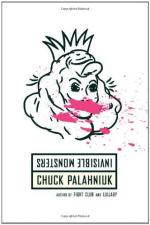 Chuck Palahniuk
This Study Guide consists of approximately 34 pages of chapter summaries, quotes, character analysis, themes, and more - everything you need to sharpen your knowledge of Invisible Monsters.

This detailed literature summary also contains Topics for Discussion and a Free Quiz on Invisible Monsters by Chuck Palahniuk.

Invisible Monsters is a work of fiction by best selling novelist by Chuck Palahniuk. Invisible Monsters is a narrative on the search for one's identity. Shannon McFarland is a model who has been shot in the face, leaving her with a hideous disfigurement that will change her life forever. While adjusting to this new life, Shannon meets Brandy Alexander, a flamboyant transgender who teaches Shannon that a person's past does not have to define their future. Unfortunately, Brandy's past will define Shannon's future when she learns that Brandy is more than just a unique new friend. Invisible Monsters is a quick-paced novel filled with unique characters that will leave the reader gasping at each surprise turn in the plot.

Shannon McFarland is in the hospital recovering from a horrific gunshot wound when she meets Brandy Alexander. Shannon is essentially alone. Shannon's boyfriend has ended their engagement, and Shannon's best friend has stolen all her clothes while pretending to be the concerned friend. Shannon has not grieved for her loss, though she knows that she will never again work as a model. Shannon tries to get work with her hands or her feet, but even that is unsuccessful. Shannon has no idea what she will do when she is released from the hospital, but wastes little time worrying about it. On the day her bandages are removed, Shannon goes to the store without covering her wounds. Shannon is shocked at the reactions of the other customers.

Shannon meets Brandy Alexander in the speech therapist's office. Brandy Alexander tells Shannon that her past is not important. Brandy suggests that Shannon forget the past and rewrite herself in order to create a new future. Brandy also shows Shannon how to fashion veils for herself in order to hide her disfigurement. Shannon finds Brandy fascinating and they become fast friends.

When Shannon is released from the hospital, she goes to her friend Evie's home. Evie has to go out of town almost immediately on a modeling job and leaves Shannon alone. In the middle of the night, Shannon hears a car pull up outside and someone enter the house. Shannon goes downstairs to find her ex-fiance, Manus Kelley, poised to kill her. Shannon manages to lock Manus in a closet and tries to call for help. Unfortunately, Shannon's disfigurement makes it impossible for her to speak. Instead, Shannon sets the house on fire and locks Manus in the trunk of his car before stealing it.

Shannon turns to her new friend, Brandy, for help, sure that she will soon be arrested for arson. While waiting for Brandy to join her, Shannon learns that Brandy is really her brother Shane and that the story of his early death due to AIDS was a joke perpetrated on her parents because of the cruel way in which they threw him out of their home. Shannon, who has never liked Shane because she feels that her parents love him more than her, is angry, but desperate. Shannon needs Brandy to help her. Unable to confront Brandy with the truth, Shannon meekly follows her on a cross country trip to steal drugs and to search for Brandy's long lost sister.

On the road trip, Shannon poisons Manus slowly with artificial female hormones and plots to destroy both Evie and Brandy. Shannon puts into motion a plan to force Evie to give her the insurance money for the house that Shannon burned down. When Evie sends the money, she threatens to kill Shannon if she ever sees her again. When Shannon realizes that Brandy looks like her, she decides to set up a confrontation between Brandy and Evie. When the confrontation takes place at Evie's wedding, Brandy is shot. Shannon feels guilty for not trying to stop the shooting until she learns that Brandy and Evie know each other and that the shooting was faked. Later, Shannon decides to give Brandy her identification and disappear, allowing her brother to begin the new future he has wanted for so long.

More summaries and resources for teaching or studying Invisible Monsters.