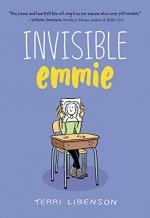 Libenson, Terri
This Study Guide consists of approximately 40 pages of chapter summaries, quotes, character analysis, themes, and more - everything you need to sharpen your knowledge of Invisible Emmie.

The following version of this book was used to create the guide: Libenson, Terri. Invisible Emmie. Harper Collins, 2017. Nook Version.

Invisible Emmie is a graphic novel that is told in the first person by the main character, Emmie. The novel seems to rotate its point of view between quiet and timid Emmie and the perfect and beautiful Katie, but in the end we learn that Katie is a fictional cartoon character created by Emmie, who draws comics in her notebook in order to help her deal with the pressures and stresses of being a girl in middle school. Emmie’s sections resemble a traditional novel with lots of white space and black words, interspersed with small sketches that add to the narrative. Katie’s sections resemble a traditional comic book. All of the action is told in colorful panels that feature captions, thought-bubbles, and dialogue-bubbles.

The novel begins with a “prelogue” in which Emmie tells us that she has turned into a puddle of slime, and that she will explain how this happened and why. In the prelogue, Emmie talks about all the YA books that she has read, and said that most of them feature a main character who is an outcast for a specific reason and is bullied because of that reason. But Emmie is a main character who is simply quiet and unremarkable, neither bullied or popular, but simply invisible.

As the novel starts in earnest, Emmie introduces herself. She is 13 years old and she lives with her two distant parents who are revamping their careers now that Emmie’s siblings have all moved out and gone on to college. Emmie spends a lot of time alone, and in this time she discovers that she loves to draw. In the first comic book section, Katie introduces herself as a beautiful, athletic, popular girl with a picture-perfect life.

On Monday morning, Emmie wakes up and goes to school. She is frightened to tell two boys standing in front of her locker to move because she is so shy and so afraid of talking to new people, especially boys. In the comic-strip, Katie arrives at school full of happiness and joy as everyone moves aside so she can reach her locker and her large group of friends. Emmie meets her best friend since kindergarten, Brianna, before homeroom and they walk to class together. Homeroom is the only class they have together because Brianna is gifted and placed into all the advanced classes. Now that they are in middle school, they spend a lot of time apart and their friendship is strained. In the comic strip, Katie goes to homeroom and sits with all her friends, who tell her that a boy likes her.

After homeroom, Emmie stops at the bathroom where she fantasizes about a vacation from school and then she goes to science class where no one talks to her. She draws in her notebook so that she has something to focus on besides her anxiety. In the comic strip, Katie goes into science class and sits with all her friends. She watches as Joe Lungo, a bully, steals Emmie’s notebook and laughs at the drawing of Katie. Katie feels bad for Emmie, but she thinks that the girl needs to stand up for herself.

After English, Emmie goes to lunch, where she sits with Brianna. The girls decide to write love-letters to their crushes as a joke. When the bell rings, the girls rush to class, and Emmie drops a piece of paper. In the comic strip, Katie eats lunch with all her friends and Tyler, and then she goes to her locker. Joe Lungo shows her a love letter to Tyler Ross that he found on the ground.

Emmie goes to health class, but the heater is broken so the class goes into the library where Brianna is working through her study hour. They sit together and talk while in the comic strip Katie sits with her friends in the library and gossips about Tyler. When the heater is fixed, Emmie and her class go back to health class and design collages. While Emmie is looking for supplies, Joe Lungo reads her note to Tyler out loud. Emmie runs out of the classroom and cries in the bathroom. In the comic strip, Katie comes into the bathroom and comforts Emmie. She walks her back to class and gives Joe a dirty look.

After health, Emmie goes to Spanish and mopes because she thinks her life is over. The bell rings and she runs to history class, but she runs into Joe in the hall and he teases her and tells her he showed it to Tyler. Then she runs into Tyler, who says hello to her. She does not understand why he is being nice. In the comic strip, Katie leaves Spanish class and watches Tyler and Emmie interact in the hallway. Tyler ignores Katie, and she is baffled.

In history, Brianna texts Emmie and tells her to meet her in their secret spot. After class, Brianna does not comfort Emmie. Instead, she is furious that Emmie might have lost her note, too. She tells her to find it or they will no longer be friends. Emmie checks her locker and finds the note safe. She texts Brianna and then goes to math class where Joe and Tyler are talking about the note. In the comic strip, Katie breaks up with Tyler because she does not like the way he is acting. She leaves class and tries to talk to Emmie, but Emmie tells her to stop trying to save her.

Emmie goes into the bathroom and cries because she is mad. She walks to art class and runs into Tyler and Joe. Joe makes fun of her and she stands up to him and tells him to stop. When he persists, she and Tyler both yell at him to “shut up,” and then burst into laughter. They walk to art class together and talk all through class until the teacher tells Tyler to go sit at his desk. Emmie is disappointed, but then her classmate, Sarah, starts talking to her. She tells Emmie that everyone thinks her note was just a funny joke and that Joe is rude and a bully. In the comic strip, Katie feels like she is becoming invisible.

Emmie leaves art with two new friends and goes to her locker. She asks the boys standing in front of it to move and then she jokes about the note with them. Brianna apologizes for being selfish and they get on the bus to go hang out together. Emmie tells Brianna about Katie and her comic book, and says that she does not think she needs to use Katie as a coping devise anymore. The girls spend the afternoon together and then Emmie’s mom picks her up and asks her how her day was. Emmie leaves out a lot of drama, but tells her mom that she has made some new friends.

More summaries and resources for teaching or studying Invisible Emmie.