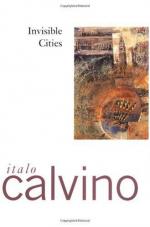 Italo Calvino
This Study Guide consists of approximately 37 pages of chapter summaries, quotes, character analysis, themes, and more - everything you need to sharpen your knowledge of Invisible Cities.

This detailed literature summary also contains Topics for Discussion and a Free Quiz on Invisible Cities by Italo Calvino.

The great Kublai Khan sits in his garden, sensing the end of his empire. He sends for news from his distant holdings and is answered by Marco Polo. As Polo weaves tale after tale of the cities he has visited in Khan's name, it is impossible to tell if the cities actually exist or if they were created from Polo's imagination. Polo tells of trading cities, hidden cities, cities and the dead, and cities and the sky. By the end it becomes clear that each of the wondrous places is the same city. Even though Invisible Cities is a short novel, it provides volumes of information that will stay with the reader for years after he or she has put it away.

Khan does not necessarily believe what Polo tells him of the distant cities. He is however, entranced by the stories. The conversations between Polo and Khan provide a framework for the different stories that Polo tells. The stories are in essence reports on the cities within the empire. The difference is that these are not standard reports. Polo weaves poetry into his prose and provides a different way of looking at the cities. He gives the cities life and literally describes them as beings. Many times he will refer to a city as though it were a woman.

The reader sees that there is an understanding between the two men, even when they do not speak the same language. They can sit together in silence and imagine what the other will say in response to a question. Khan is worried that his empire is crumbling or that it is so vast that it will collapse under its own weight. Polo tries to get Khan to see the empire as whole by describing certain small aspects. Polo tends to weave his stories around the emperor's moods. If the emperor is angry, Polo tries to appease him. If the emperor is in good spirits, Polo warns him being too confident.

Polo picks dominant characteristics of each city whether it is its architecture, people, or location and then tells his story with that characteristic as its focus. The language Polo uses is evocative, poetic, and existential. His descriptions and conversations with Khan become increasingly surreal as his stories go on. The reader sees that Polo is layering his descriptions on top of each other. He is building towards something. The reader never really learns the purpose of the stories. He or she is simply too entranced in the beauty of the language and surreal nature of the descriptions.

In all, Polo describes 55 different cities. Each city is unique while being very similar to the others. Polo imbues each city with his own perceptions and asks the emperor to do the same. He says that since they are sitting in the garden enjoying a nice breeze, the emperor will understand a description of a city in which he sat outside and enjoyed a nice breeze. He is trying to place them both in a specific time and place. In this way he can make the city come to life for the emperor, even if the city does not exist.

More summaries and resources for teaching or studying Invisible Cities.