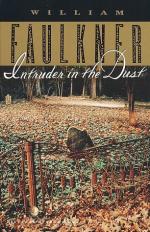 William Faulkner
This Study Guide consists of approximately 39 pages of chapter summaries, quotes, character analysis, themes, and more - everything you need to sharpen your knowledge of Intruder in the Dust.

Intruder in the Dust Summary & Study Guide includes comprehensive information and analysis to help you understand the book. This study guide contains the following sections:

This detailed literature summary also contains Topics for Discussion and a Free Quiz on Intruder in the Dust by William Faulkner.

Intruder in the Dust by William Faulkner is a classic novel that is part mystery and part social commentary on the racial situation in the southern United States of the late 1940's. It begins with our narrator, Charles Mallison, watching a black man being escorted from the sheriff's car into the city jail. From here, the reader learns how Charles met this man, Lucas Beauchamp, 4 years earlier.

Charles is rabbit hunting with his family servant, Aleck Sander and another young black boy when he falls into the creek. A stranger comes along, helps him from the water and takes him home. Charles eventually remembers a story about this man and figures out that he is Lucas Beauchamp, a local landowner. Charles accepts a warm meal from Lucas and the chance to dry his clothes by the fire. Charles tries to pay Lucas after the meal, but Lucas refuses to take the money.

Charles becomes obsessed by this debt he feels he owes Lucas Beauchamp. He sends gifts to Lucas and his wife only to have Lucas send him one in return. Charles runs into Lucas in town and Lucas reminds him not to fall into any more creeks. It is only when Lucas walks past him without acknowledging him that Charles feels as though his debt is no longer owed. That is, until Lucas is arrested for killing a white man and calls out to Charles in a crowd.

Charles's uncle is a lawyer. Charles takes Uncle Gavin to the jail to meet Lucas. Uncle Gavin assumes Lucas is guilty and already has a legal plan in mind that will, with luck, send Lucas to jail, but not to the gallows. Lucas, however, knows more about the murder than he is willing to tell the lawyer. He asks Charles to go to the cemetery and dig up the body of Vinson Gowrie, the man he supposedly killed.

Charles immediately goes to his uncle for help, but Uncle Gavin does not believe that Lucas is telling the truth. "What else would an accused murderer say?" he reasons. Yet, waiting in Uncle Gavin's office at the time Charles arrives is an old woman by the name of Miss Eunice Habersham, who happens to be a good friend of Lucas's deceased wife. She believes Charles and is willing to go with him to the cemetery.

At the cemetery, Charles and Aleck Sander dig up the grave of Vinson Gowrie to see whether the bullet that killed him was really fired from a Colt .41. When they open the pine coffin, however, they find another man inside. Charles goes back to his uncle and this time he convinces him. Charles, Uncle Gavin, Miss Habersham and Aleck Sander go to Sheriff Hampton and tell him what they have found. The sheriff obtains a legal order to exhume Vinson's body. Then the men leave Miss Habersham and Charles's mother at the jail and they go back to the cemetery.

Vinson Gowrie's father meets them at the cemetery and has his two boys dig up the grave. Inside, they discover an empty coffin. After some hypothesizing, the group searches the woods that run alongside the road. First, they find a man named Jake Montgomery buried in a ditch deep in the woods. Then, they find Vinson Gowrie buried in the quicksand under a bridge. The sheriff takes one look at Vinson and he knows Lucas's gun did not kill him. The man who killed Vinson Gowrie is his own brother.

Both the sheriff and Uncle Gavin go to Lucas and little by little, Lucas tells them what really happened. Apparently, the two brothers had a scheme with their uncle to sell lumber cut from their uncle's land, but the older Gowrie brother began stealing the lumber under the cover of darkness. When he learned that Lucas knew what was going on, he shot Vinson in the back and made it look like Lucas did it. Later, before Charles and Miss Habersham get to the cemetery to exhume Vinson's body, Crawford Gowrie catches his business partner doing that exact thing. He kills Jake Montgomery and puts his body in the grave. When he realizes what Charles and Miss Habersham are up to, he goes back and steals Jake's body, too.

After developing a scheme to catch Crawford, the sheriff releases Lucas. Crawford then kills himself in his jail cell shortly after his arrest. Everything returns to normal, including Lucas, who shows up at Uncle Gavin's office to gloat in his own way. He pays Uncle Gavin what he owes him, only he pays him in pennies.

More summaries and resources for teaching or studying Intruder in the Dust.

Intruder in the Dust from BookRags. (c)2022 BookRags, Inc. All rights reserved.