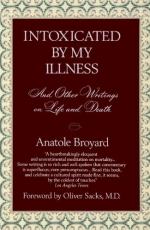 Intoxicated by My Illness and Other Writings on Life and Death Summary & Study Guide includes comprehensive information and analysis to help you understand the book. This study guide contains the following sections:

This detailed literature summary also contains Quotes and a Free Quiz on Intoxicated by My Illness and Other Writings on Life and Death by Anatole Broyard.

The following version of this book was used to create this study guide: Broyard, Anatole. Intoxicated By My Illness and Other Writings ON Life and Death. Ballantine Books, 1992. Kindle.

Intoxicated by My Illness is a collection of writings by American literary critic and former editor of The New York Times Book Review, Anatole Broyard.

In 1989, Broyard was diagnosed with terminal prostate cancer, passing away in 1990. Before his death he wrote multiple essays on illness and dying, three of which make up Parts One through Three of Intoxicated by My Illness. The rest of the works included break from this format, and are comprised of journal entries in Part Four, a literary review of death written in the early 1980s, and finally, a short story published in 1954.

“Part One: Intoxicated by My Illness” is a brief essay chronicling the early days of Broyard’s illness. Here, the author explains how illness, for a writer, is an intoxicating experience because it is truly tragic. Writers, like himself, seek out tragedy for inspiration and therefore relish complex, negative experiences. Broyard also details how illness alienates one from friends and family.

In “Part Two: Towards a Literature of Illness,” Broyard assumes his role as a literary critic, creating a veritable bibliography of illness literature. He opens the section referencing Shirley Hazzard's novel The Transit of Venus and how it allowed him to transcend his circumstances while he was in the hospital. Hazzard's work made Broyard realize that literature could truly help terminal patients and call for the creation of a genre of illness literature. He states that he has not come across a single nonfiction book that does serious illness justice. He praises fiction novels like Thomas Mann’s The Magic Mountain and Malcolm Lowry’s Under the Volcano for fearlessly tackling the topic and avoiding the comfort of clichés. Broyard takes issue with most nonfiction books about illness because in their attempt to inspire, they become disingenuous. However, in the nonfiction category, Oliver Sacks is Broyard’s favorite author though Susan Sontag, Norman Cousins, and and Bernie Siegel also receive honorable mentions.

“Part Three: The Patient Examines the Doctor” is Broyard’s indictment of modern doctor-patient relations. In this essay, the author argues that doctors should reveal more of themselves to their patients, creating a more personable and healing relationship. To argue this point, Broyard details his own experiences with his various doctors. These men were all described as interacting with patients with the same detachment of a mechanic fixing a car. Ideally, Broyard’s doctor would enter into a complex relationship with his patients, treating them as human beings rather than broken machine parts. The most striking of these descriptions is of his first urologist, who was a nondescript looking man who hardly spoke to Broyard. To compensate for the disappointment he felt towards these doctors, the author recounts spending time dreaming up his ideal physician. Broyard believes that, though it would make the doctor more vulnerable, his vision of a more personable doctor-patient relationship would be mutually beneficial.

“Part Four: JOURNAL NOTES May-September, 1990” breaks from the formula of the first three parts in that it is a compilation of random journal notes. Here, the reader is offered insight into Broyard’s creative process and private fears. Within these fragments are the beginnings of Broyad’s main thesis points including the necessity of developing one’s own style for illness and the necessity of a personal relationship with one’s doctor. The journal notes also reveal a more vulnerable side of the author, detailing his personal fears and regrets.

“Part Five: The Literature of Death 1981-1982” was written before Anatole Broyard fell sick with cancer. Broken up into five small parts, it explores an emerging pattern of death literature that Broyard saw coming out of the late 1970s and early 1980s. These books, unlike the self-help movements of the 1960s, essentially taught one how to face death and how to die. Broyard believes that people have forgotten how to deal with death and dying because the once communal process became a solitary in the eighteenth century. He suggests that the rash of literature that had emerged as he wrote could lead to a true understanding and acceptance of death in the twentieth century. To illustrate this point, Broyard names several books that he finds particularly significant, namely, Lisl Goodman’s Death and the Creative Life and Ernest Becker’s The Denial of Death. Finally, Broyard recounts the story of his writer friend Paul Breslow who died of cancer. Breslow spent his final days writing a novel that was never completed. His unflinching desire to finish his final work even in the face of immense pain, proves to Broyard that having one’s own style of illness, be it through the creation of art or other means, is an essential aspect of the dying process.

“Part Six: What the Cystoscope Said” is a short story written by Broyard in 1954. It is an only slightly fictionalized account of his father’s death by cancer and his subsequent entry into manhood. The story chronicles Broyard’s father’s degeneration from a strong man to an infantile shell of his former self at the hands of cancer. Broyard recounts that as his father deteriorated, he rapidly took on the role of the patriarch. The story is filled with symbolism and references to this process which can be compared to a benevolent vampirism as the strength of the father is passed on to the son. In the hospital Broyard struggled with the inhuman way in which the dying were treated and found it all to be overwhelmingly grotesque. His father, and indeed all of the terminally ill patients, were placed in a large room and treated as nuisances rather than suffering human beings. His father’s attending nurse, Miss Shannon, became emblematic of this and Broyard decided that he had to possess her sexually in order to avenge all of the dying men that she treated. Just after his tryst with the nurse, Broyard’s father died, expelling his last breath into his son’s mouth and therefore finally passing on the role of the patriarch.

Intoxicated by My Illness and Other Writings on Life and Death from BookRags. (c)2022 BookRags, Inc. All rights reserved.