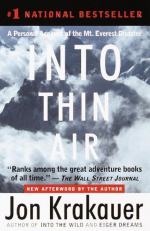 Jon Krakauer
This Study Guide consists of approximately 60 pages of chapter summaries, quotes, character analysis, themes, and more - everything you need to sharpen your knowledge of Into Thin Air.

This detailed literature summary also contains Topics for Discussion and a Free Quiz on Into Thin Air by Jon Krakauer.

Into Thin Air tells the story of the disaster in which several climbers died on the slopes of Mt. Everest in 1996, as witnessed by Jon Krakauer, a journalist who is also one of the climbers to reach the summit that year. Led by Rob Hall, one of the most highly respected climbers in the world at that time, the team Krakauer climbs with becomes split up after a series of small incidents and a sudden change in the weather, leaving five of his teammates dead on the mountain. Another expedition led by the flamboyant Scott Fischer also loses climbers in the storm, including Fischer himself. Krakauer recounts the events of the ill-fated expeditions from his own personal experience and makes several suggestions as to what may have led to the climbers being caught high on the mountain when they might have turned back and remained safe. He also examines his own role in the events as they unfolded, and how much he himself is to blame for what happened.

In 1996, several commercial expeditions led by professional climbers set out to climb to the summit of Mt. Everest, the highest point on Earth. Outdoor journalist Jon Krakauer accompanies one of these teams of climbers as an assignment for Outside Magazine to write about the increased commercialization of climbing, in particular the climbing of Everest. Krakauer is an experienced climber, although not at high altitude, and it is a lifelong dream of his to climb Everest. His team, led by the well-known New Zealander Rob Hall, is made up of people of varying strength and ability, and from the beginning, Krakauer is doubtful that all will reach the top.

As the climbers get to know one another while making several acclimatization climbs up the mountain, they start to feel more like a team. Mountain climbing is still a solitary endeavor in many ways, Krakauer explains, however, and there are times when a climber must take care of himself first. Krakauer's position is even more complicated as he is along as a journalist, whose job is to report on the people he climbs with. As the expedition proceeds and begins to experience problems, Krakauer's role on the team begins to blur until he eventually becomes one of the guides after two of the group's leaders die on the mountain.

Despite various injuries and setbacks, Hall leads his team to the high plateau called the South Col, from which they will make their attempt on the summit on May 10, 1996. Hall tells his group that they will climb until 2 p.m., at which point they will turn back, whether they have reached the top or not. Some climbers, exhausted, turn back on their own long before reaching the top and return to Camp Four on the South Col. Krakauer is one of the few climbers that day who reach the summit before the 2 p.m. deadline. On his way down, he runs into a jam of climbers, including Hall, still on their way up. For some reason, Hall has ignored his own deadline and continued to climb, along with another climber in his group.

As Krakauer begins to descend, he notices clouds forming where the sky had earlier been clear. A thunderstorm sweeps in with high winds, reaching its peak just as Krakauer arrives at the relative safety of Camp Four. The other climbers above him on the mountain are in danger. Some make their way back to within 1,000 feet of the camp, but become lost in the blinding snow and have to huddle together to stay warm. They are eventually found, but two of them are left behind for dead. Amazingly, one of these climbers later revives and finds his way back to camp, badly frostbitten, but alive.

Near the summit, the leader Rob Hall has stopped descending, staying with one his clients, a climber named Doug Hansen. They become stranded by the storm and cannot continue. Hansen dies on the mountain. Hall survives for a time and is in radio contact with others down below, but rescue attempts to reach him have to turn back when the bad weather continues. After speaking with his wife by satellite phone, Hall ends radio contact. His body is discovered by climbers several days later.

Krakauer takes on the role of guide to the remaining climbers in his group and helps them down the mountain to Base Camp. He writes about his own self-searching in looking for the events that led up to the disaster, but is plagued by uncertainty. Upon returning home to Seattle, Krakauer writes the magazine article he was hired to complete and faces open criticism of his role in the doomed expedition. He discovers after the article is published that he has made a critical error in describing the events. Due to his own disorienting lack of oxygen while on the mountain, he mistakenly thought that one of the guides had accidentally fallen from a mountain cliff during the storm when in fact the guide had set off up the mountain to help Hall, dying in the attempt. Krakauer is left to face this mistake and to ask himself repeatedly if he could have done more to help his fellow climbers.

More summaries and resources for teaching or studying Into Thin Air.