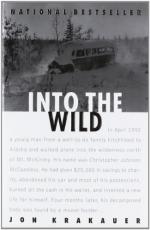 Additional Resources for Into the Wild by Jon Krakauer

"Jon Krakauer." In Contemporary Authors. Volume 153. Eds. Terrie M. Rooney and Jennifer Gariepy. New York: Gale, 1997, p. 195. Provides a brief introduction to Krakauer as a journalist and writer, including brief but useful overviews of Eiger Dreams and Into the Wild.

Krakauer, Jon. "Death of an Innocent."

Outside 28,1 (January 1993): 38. Krakauer's award-winning article was written shortly after the discovery of McCandless's death and formed the basis of Into the Wild.

——. Into Thin Air: A Personal Account of the Mt. Everest Disaster. New York: Villard, 1997. Krakauer's account of the catastrophic 1996 Everest ascent is filled with anecdotal material about his childhood and the history of his love of climbing and the wilderness.