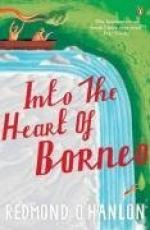 Into the Heart of Borneo Summary & Study Guide

Redmond O'Hanlon
This Study Guide consists of approximately 25 pages of chapter summaries, quotes, character analysis, themes, and more - everything you need to sharpen your knowledge of Into the Heart of Borneo.

Into the Heart of Borneo Summary & Study Guide Description

Into the Heart of Borneo Summary & Study Guide includes comprehensive information and analysis to help you understand the book. This study guide contains the following sections:

This detailed literature summary also contains Topics for Discussion on Into the Heart of Borneo by Redmond O'Hanlon.

Into the Heart of Borneo is a comical but non-fiction book written about the trip British authors and journalists Redmond O'Hanlon and James Fenton took into the middle of Borneo through the Malaysian state of Sarawak. Borneo is the third largest island in the world, next to Greenland and New Guinea. It also contains some of the world's most unique wildlife. The protagonists are middle aged writers who have few survival skills but are travelling to Borneo in order to explore and observe rare plant and animal species.

The book is written by Redmond O'Hanlon and contains numerous references to previous guides to Borneo written by earlier explorers. These books extend back in time over one hundred years and O'Hanlon often quotes from them extensively. Fenton, on the other hand, spends much of his time reading books like Les Miserables during the trip.

When the two men arrive in Borneo they use a letter of introduction from Oxford in order to acquire the necessary guides. They are not only travelling to Borneo, but to areas of Borneo not fully mapped by even British intelligence. They have been advised on the extensive methods of taking care of themselves in the jungle and acquire three reliable and good-natured guides Leon, Inghai and Dana, from the Iban tribe in Sarawak. The worst experiences they suffer, however, are nearly falling into river rapids, exhaustion, diarrhea and being covered with leeches.

O'Hanlon and Fenton engage in wild antics whenever they can. The peoples or Borneo are up for drinking whenever O'Hanlon and Fenton are, and so many days are full of the two getting incredibly drunk and acting foolish. When they are travelling, however, they are usually intent on observing various rare plant and animal species, which O'Hanlon discusses in detail in the book. One of the reasons the two went to Borneo was to try to see the legendary Borneo Rhinoceros, an animal that may well be extinct.

The book contains seventeen chapters, most of which cover a single day in Borneo. Most of the book covers Fenton and O'Hanlon's travels from their arrival in Borneo, their navigation up the river and their final arrival at the Bukit Batu Tiban Mountain near the Sarawak-West Kalimantan border. After their return, however, Fenton and O'Hanlon have still not seen the Borneo Rhinoceros, and so travel to see the nearly extinct and mostly nomadic Ukit people. Once they arrive, they find that the younger generation of Ukit have mostly abandoned their nomadic ways and are sharply divided from the older generation. After some serious social difficulties, Fenton and O'Hanlon prepare to leave, but before they do, they ask an old Ukit man if he has seen the Borneo Rhinoceros. He confirms that when he was a young man, he killed eight of them by himself. There the book ends.

More summaries and resources for teaching or studying Into the Heart of Borneo.

Into the Heart of Borneo from BookRags. (c)2022 BookRags, Inc. All rights reserved.