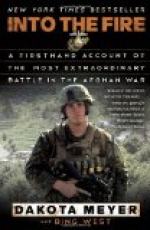 Into the Fire: A Firsthand Account of the Most Extraordinary Battle in the Afghan War Setting & Symbolism

Dakota Meyer
This Study Guide consists of approximately 39 pages of chapter summaries, quotes, character analysis, themes, and more - everything you need to sharpen your knowledge of Into the Fire: A Firsthand Account of the Most Extraordinary Battle in the Afghan War.

Columbia, KY is the small town where Dakota Meyer was raised.

Dakota is sent to boot camp at Parris Island, SC.

Afghanistan is the main setting of "Into the Fire" as this is where Dakota is stationed with Team Monti and where the Battle of Ganjigal takes place.

Camp Joyce, ten miles south of Combat Outpost Monti, is the forward operating base and headquarters for U. S. Army Battalion 1-32 which is tasked with preventing enemy infiltration from Pakistan. This is where Major Kevin Williams, Lt. Johnson's superior, is stationed. Camp Joyce is also headquarters for the Afghan battalion that Team Monti advises.

Meyer and his team are stationed at Combat Outpost Monti, ten miles north of Camp Joyce, and they run patrols to local villages from Monti.

More summaries and resources for teaching or studying Into the Fire: A Firsthand Account of the Most Extraordinary Battle in the Afghan War.

Into the Fire: A Firsthand Account of the Most Extraordinary Battle in the Afghan War from Gale. ©2005-2006 Thomson Gale, a part of the Thomson Corporation. All rights reserved.