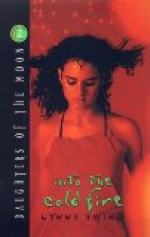 Into the Cold Fire Summary & Study Guide includes comprehensive information and analysis to help you understand the book. This study guide contains the following sections:

This detailed literature summary also contains Topics for Discussion on Into the Cold Fire by Lynne Ewing.

As the story unfolds, the readers learn about the many secrets that the Daughters of the Moon have. Vanessa can make herself invisible. Catty time travels and Jimena has premonitions. It starts when Serena runs across a ceremony taking place at the beach. As the teenagers around a fire chant, a young blonde girl steps into the fire, but she doesn't burn. Serena realizes that the flames from the fire are not hot, but are cold instead.

Stanton, the leader of the followers, runs after Serena. When she wakes up, she doesn't remember how she got on the sand below the cliff where she saw the ceremony, and her brother says she's been missing for two hours. When a transfer student from France, Zahi, starts school, he and Serena have an instant attraction. It's not until Zahi tries to force Serena, as the chosen one, into the cold fire that Serena realizes Zahi has been stealing her memories and toying with her emotions. Serena and her friends plan to trick Zahi, but Serena goes into the cold fire, becomes a witch goddess and starts to enjoy the feeling of immortality.

By the end of the novel, Serena is back to being a Daughter of the Moon, thanks to her fellow sisters. Zahi is back from the dark side as well, but another fellow student, Morgan seems to be part of a new group of Followers.