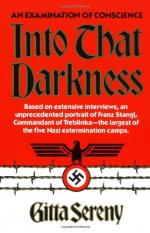 Into That Darkness: An Examination of Conscience Summary & Study Guide

Gitta Sereny
This Study Guide consists of approximately 37 pages of chapter summaries, quotes, character analysis, themes, and more - everything you need to sharpen your knowledge of Into That Darkness.

Into That Darkness: An Examination of Conscience Summary & Study Guide Description

Into That Darkness: An Examination of Conscience Summary & Study Guide includes comprehensive information and analysis to help you understand the book. This study guide contains the following sections:

This detailed literature summary also contains Topics for Discussion and a Free Quiz on Into That Darkness: An Examination of Conscience by Gitta Sereny.

This is a nonfiction book regarding a World War 2 German soldier whose duty was to command a concentration camp designed for the purpose of containing and killing of Jewish prisoners—prisoners of the German State and of the War. The author is a journalist who conducted extensive and thorough research into the subject of the book, Franz Stangl. His role as a servant of genocide in a Reich has its painful echo in the "ethnic cleansing" of this past decade in Bosnia and Croatia. Though the most recent victims are not Jews, the truth is that, pretty much the same kind of thing has been being repeated against a different group of people despite the horror with which the world responded to what happened to the Jews in Germany under the Nazi Party.

The author wrote the book in an effort to examine how the human conscience really functions within the individual, the society, the world. The subject followed orders during the war and went to jail afterward for his war crimes. It was while imprisoned that the author interviewed him personally and conducted research. Here, cruelty is examined as an ethical problem or set of dilemmas and it is viewed from the attitude of sympathy for the victims rather than from the view that the perpetrators are somehow in the right. Both views are available in every conflict. As such, this work is one of ethics and individual biography, consisting of interviews with a soldier who carried out acts of cruelty ordered by those in authority over him and at his own discretion. This makes it an extremely eerie book and a legitimate part of twentieth century history. The book covers a large portion of Franz Stangl's career. The man has a number of talents and skills which turn up in a variety of ways throughout the course of the book. The book ends with his death. Readers are left to draw conclusions for themselves about this war criminal and his conscience. He was in many ways a perfectly good man, in actual fact, but suffered from an extreme level of self-preservation that eroded his morality when he was put to the test. If life is the ultimate value then he preserved his by tolerating the destruction of millions of others. If morality and truth are ultimate values, then he failed to fight for his life as fighting to protect his values. He might have had to sacrifice his life to do so. The book reveals the conflict between the idea that spiritual survival involves living one's values and that other kinds of "death" can occur for people who neglect to do so.

Into That Darkness: An Examination of Conscience from BookRags. (c)2022 BookRags, Inc. All rights reserved.