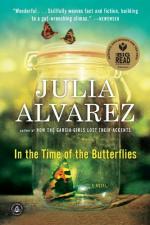 Compare & Contrast In the Time of the Butterflies by Julia Álvarez

Julia Álvarez
This Study Guide consists of approximately 43 pages of chapter summaries, quotes, character analysis, themes, and more - everything you need to sharpen your knowledge of In the Time of the Butterflies.

I960: Trujillo rules the country. No opposition party exists. No genuine elections are held. Joaqum Balaguer is Trujillo's puppet president.

1996: Balaguer steps down from the presidency. He held the office from 1966 to 1978 and from 1986 to 1996, winning in rigged elections. The new president, Leonel Fernandez Reyna, is elected with Balaguer's support. The election is judged non-corrupt. His vice-president is Jaime David Fernandez Mirabal, Dede Mirabal's son. Patna Mirabal's son Nelson Gonzalez Mirabal is the vice-president's chief aid. Minerva Mirabal's daughter Minou Tavares Mirabal is deputy foreign minister.

1960: A 137-foot obelisk stands in Cuidad Tru-jillo. The dictator erected it in his own honor.

1999: The obelisk in the renamed Santo Domingo is adorned with a mural of the four Mirabal sisters. It is a monument to all who straggled for liberty in the country.

1960: On November 25, Patria, Minerva, and Mari Teresa Mirabal are killed under Trujillo's orders...

More summaries and resources for teaching or studying In the Time of the Butterflies.

In the Time of the Butterflies from Gale. ©2005-2006 Thomson Gale, a part of the Thomson Corporation. All rights reserved.