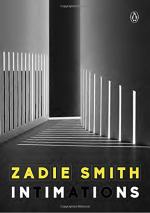 Zadie Smith
This Study Guide consists of approximately 42 pages of chapter summaries, quotes, character analysis, themes, and more - everything you need to sharpen your knowledge of Intimations.

Why does Smith wish the tulips she sees in a park were actually peonies? What is the symbolic difference between these two flowers?

Smith views tulips as being gaudy, and even a vulgar representation of overactive fertility, since they grow in such great quantities and bright, flashy colors. She wishes the tulips she sees were actually peonies because peonies are more rare, difficult to cultivate, and thus less 'common.' They are elegance incarnate, whereas tulips are simply ordinary. This symbolic difference represents to Smith the way in which womanhood is commonly equated with fertility and beauty to the common eye rather than a more refined and complex definition of womanhood which Smith believes in, one which can allow for difference amongst women and shies away from stereotypes.

What does Smith find so alarming about the way she is attracted to the tulips in the park?

More summaries and resources for teaching or studying Intimations.