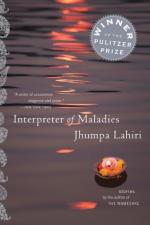 Interpreter of Maladies Topics for Discussion

Jhumpa Lahiri
This Study Guide consists of approximately 76 pages of chapter summaries, quotes, character analysis, themes, and more - everything you need to sharpen your knowledge of Interpreter of Maladies.

Explain how the secrets Shoba and Shukumar keep from each other eventually result in their splitting up as a couple.

Discuss how Mr. Pirzada adapts to his temporary student life in the United States while his family is experiencing hardships during the war with India and Pakistan.

Explain how Mr. Kapasi's fantasies, hopes and aspirations for Mina Das are dashed when she tells him she is as old as his children could be.

Discuss how Boori Ma's living arrangements in the four-story building might be different from the building occupancy codes authorized by a typical American city.

Discuss how the marital difficulties of Laxmi's cousin parallel the lifestyle Miranda is developing with Dev and his wife. Does it bother Miranda? What does she do about it?

Why does Mrs. Sen drive on the highway with the car and Eliot when she has expressed such...

More summaries and resources for teaching or studying Interpreter of Maladies.