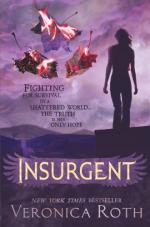 Veronica Roth
This Study Guide consists of approximately 43 pages of chapter summaries, quotes, character analysis, themes, and more - everything you need to sharpen your knowledge of Insurgent.

At the age of 16, each member of society must undergo a series of tests and simulations to determine which faction s/he will belong to, based on personality and aptitude. There are five factions that include

Abnegation (selfless), Amity (peaceful), Candor (truthful), Dauntless (brave), and Erudite (intellectual.) Those that can belong to more than one of the factions is known as being Divergent. Both Tris and Tobias are Divergent, as was Tris’ mother even though she officially belonged to the Abnegation faction.

The factions have plots against one another to gain power. Tris and Tobias must tread carefully among the groups while they learn that nothing is at it seems and that the factionless may be the most dangerous of all as they suffer in poverty and have become twice the size of the Dauntless.

What is evident in the author's choice of 'factions' is that...

More summaries and resources for teaching or studying Insurgent.