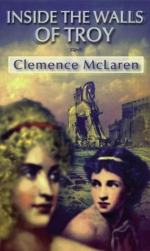 Inside the Walls of Troy Summary & Study Guide

Clemence McLaren
This Study Guide consists of approximately 37 pages of chapter summaries, quotes, character analysis, themes, and more - everything you need to sharpen your knowledge of Inside the Walls of Troy.

Inside the Walls of Troy Summary & Study Guide Description

Inside the Walls of Troy Summary & Study Guide includes comprehensive information and analysis to help you understand the book. This study guide contains the following sections:

This detailed literature summary also contains Topics for Discussion on Inside the Walls of Troy by Clemence McLaren.

"Inside the Walls of Troy" tells the story of the Trojan War and the events leading up to the war. The beginning of the story is told from Helen's perspective. It is Helen's decision to run away with Paris that starts the war. Helen’s great beauty makes her the jewel of Greece. However, since she is only twelve years old at the beginning of the book, she is more interested in horses and games than in her beauty or its implications.

Helen is kidnapped by Theseus, the ruler of Athens, because of her beauty. Through Theseus, Helen learns that her only value lies in her beauty and her only goal in life should be to be a good wife. Theseus tells Helen she must transform herself into exactly what her husband wants her to be, giving up her own identity in the process. Eventually Helen is ransomed by her brothers and returned to her home in Sparta, but by that time rumors of her kidnapping have spread and the most powerful princes of Greece are making their way to Sparta to attempt to win her before anyone else can.

Eventually Helen is given to Menelaus, brother to the great King Agamemnon, because he is the wealthiest and most powerful of her suitors. Helen has come to look at her beauty is a burden because it prevents her from being allowed to make her own decisions and choose the path of her own life. Her beauty makes her into a possession because that is all any man ever sees. However, Helen begins to appreciate her life with Menelaus because she realizes that he really does love her and when they have a daughter he becomes an excellent father. Just as Helen is deciding that her life is actually pretty good, Paris of Troy arrives and Helen is swept off of her feet by the beauty of his face, form, and words. Helen abandons her position as a wife, mother, and queen of Sparta when she falls in love with the Trojan prince. And her abandonment sets in motion the events that will eventually lead to the Trojan War. However, it is not Helen's actions that ultimately cause the war. Her actions are used as an excuse. The cause of the war is the pride of the Kings of Greece and Troy, and it is the pride of men that perpetuates the slaughter and horrors of the Trojan War.

The second half of the story is told from the perspective of Cassandra, a princess of Troy, because it is the people of Troy who are most affected by the events of the second half of the novel. Cassandra is gifted with the ability to see into the future and she sees visions of the arrival of Helen and the downfall of Troy, but no one will listen to her warnings. Cassandra eventually becomes friends with Helen because she realizes Helen’s actions were merely an excuse for the pride and avarice of men. However, this realization does not lessen Cassandra’s grief over the death of her brothers and friends at the walls of Troy. Cassandra is forced to watch in her visions and in reality as her brothers, friends, and countrymen are brutally slaughtered on the battlefield before the city gates.

Cassandra knows she is powerless to stop the war and she sympathizes with Helen’s predicament. She realizes Helen should be allowed to love whomever she chooses and Helen should be allowed to decide the path of her life for herself. She realizes Helen is a victim of the culture they live in just as much as she is. But by the end of the story it is Helen and the women of Troy who play the large roles in the end of the war. The great Greek warrior Achilles slaughters hundreds of the warriors of Troy, but ultimately he is brought down by a woman. Achilles is taken with Cassandra’s sister Polyxena and it is with her he shares the secret of his vulnerability. It is Polyxena who betrays Achilles and begins to turn the tide of the war. In the end, Troy will fall but the princesses of Troy, Cassandra, Polyxena, Laodice, and Andromache, remain standing. It is the women of Troy who gather together in the Temple of Apollo in defiance of the invading Greek army and it is the princesses of Troy who will carry on the legacy and memory of their culture.