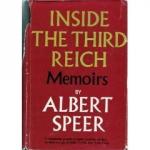 Albert Speer
This Study Guide consists of approximately 45 pages of chapter summaries, quotes, character analysis, themes, and more - everything you need to sharpen your knowledge of Inside the Third Reich.

Inside the Third Reich: Memoirs Summary & Study Guide includes comprehensive information and analysis to help you understand the book. This study guide contains the following sections:

This detailed literature summary also contains Topics for Discussion and a Free Quiz on Inside the Third Reich: Memoirs by Albert Speer.

In Inside the Third Reich: Memoirs, Albert Speer, Hitler's architect turned Armaments Minister, reflects intimately on his career at the top and the leadership's collective guilt. He worries what the technology unleashed in World War II will bring to humankind.

Albert Speer is born in 1905, enjoys a comfortable childhood, grows up apolitical, and studies architecture. He reluctantly goes to hear Hitler speak, is mesmerized and joins the Party, specifically to follow Hitler and in spite of Joseph Goebbels, with whom he tangles most of his life. Nazi commissions save his floundering career and with the death of Paul Ludwig Troost, he becomes Hitler's primary architect. An amateur architect himself, Hitler bonds with Speer and assigns him the planning of a monumental redevelopment of Berlin. Speer ignores troubling aspects of Nazism that are emerging as he is drawn into Hitler's inner circle in Berlin and Obersalzberg.

As World War II starts, Speer's life changes radically as he succeeds Fritz Todt as Minister of Armaments and Munitions. Speer preaches and practices "industrial self-responsibility," the antithesis of Nazi suspicion, and clashes with those in Hitler's inner circle who see anyone getting ahead as a threat to themselves. He fears being ousted while hospitalized, allowing major plots to hatch. Speer allies ineffectively with oft-time rival Hermann Goering against Martin Bormann, Wilhelm Keitel, and Hans Lammers, whose "Committee of Three" seeks to insulate Hitler from other influences.

Speer works wonders in raising production without raising costs and for a long while keeps production ahead of losses to Allied bombing. When Hitler orders the demolition of the German infrastructure, threatening to throw it back to the Middle Ages, Speer does all he can to circumvent orders. Hitler tells Speer straight out that he is sparing his life only because of their early bond. In the end, although he hates what Hitler has done and become, Speer retains faith in Hitler and pays a last visit to the underground bunker in Berlin.

At the Nuremberg Trial, Speer accepts personal responsibility for the regime's actions and in his final speech warns of the dangers that technology holds for humanity if it fails to act freely. He writes this book after serving his 20-year sentence in Spandau Prison, time he uses to think through all he has done and seen.

More summaries and resources for teaching or studying Inside the Third Reich: Memoirs.

Inside the Third Reich: Memoirs from BookRags. (c)2022 BookRags, Inc. All rights reserved.