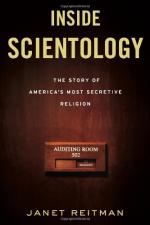 Plot Summary
+Chapters Summary and Analysis
Introduction
The Founder and Dianetics
The Franchised Faith
The Bridge to Total Freedom and Travels with the Commodore
Over the Rainbow and DM
Power is Assumed
Lisa and Flag
Seventeen Days and The Greatest Good
The Celebrity Strategy and The Seduction of Tome Cruise
The Bubble and Int
Exodus and What is True For You
Characters
Objects/Places
Themes
Style
Quotes
Topics for Discussion
Order our Inside Scientology: The Story of America's Most Secretive Religion Study Guide

Inside Scientology: The Story of America's Most Secretive Religion Quotes

Janet Reitman
This Study Guide consists of approximately 33 pages of chapter summaries, quotes, character analysis, themes, and more - everything you need to sharpen your knowledge of Inside Scientology.

"Scientology, as its critics point out, is unlike any other Western religion in that it withholds key aspects of its central theology from all but its most exalted followers. This would be akin to the Catholic Church telling only a select number of the faithful that Jesus Christ died for their sins." (Introduction, pg. xiii).

"And, unique among modern religions, Scientology charges members for every service, book, and course offered, promising greater and greater spiritual enlightenment with every dollar spent. people don't "believe" in Scientology; they buy into it." (Introduction, pg xiv).

"The ability to spin a setback as a triumph was a quality that would define Hubbard throughout his life. He was an immensely charming young man whose stories, while sometimes dubious, were often, by virtur of his own salesmanship, utterly convincing." (Chapter 1, pg. 6).

"Scientology simultaneously reflected the postwar era's optimism and its darkest and most profound...

More summaries and resources for teaching or studying Inside Scientology: The Story of America's Most Secretive Religion.

Inside Scientology: The Story of America's Most Secretive Religion from BookRags. (c)2021 BookRags, Inc. All rights reserved.