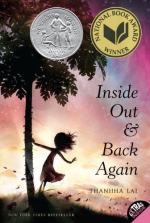 Inside Out and Back Again Summary & Study Guide

Inside Out and Back Again Summary & Study Guide Description

Inside Out and Back Again Summary & Study Guide includes comprehensive information and analysis to help you understand the book. This study guide contains the following sections:

This detailed literature summary also contains Quotes and a Free Quiz on Inside Out and Back Again by Thanhha Lai.

“Inside Out & Back Again” is a semi-autobiographical children's middle grade novel by Thanhha Lai which recounts the fleeing of Vietnam by Ha and her family and their immigration to the United States of America. In 1975, ten year-old Ha lives in Saigon, South Vietnam, with her mother and three older brothers, Vu, Khoi, and Quang. They are a close-knit, traditional family, though their father was captured by the Communists on a naval mission nine years before.

The family endures high prices and scarcities in food as North Vietnamese forces move toward Saigon. Uncle Son, a friend of Ha’s father, encourages Ha and her family to be ready to flee Saigon at a moment’s notice. Ha’s family is divided on whether to leave or stay, but in the end, Ha’s mother convinces everyone to leave. Tens of thousands of people do the same. Ha and her family make it out of Saigon by boat just as the city falls to the Communists.

Ha and her family are on board the ship for weeks, sailing toward Thailand. Food and water are scarce, but the people on board are cautiously hopeful about what could happen next. Ha and her siblings use the time to practice their English. Salvation appears in the form of an American naval vessel, which distributes food and supplies, and tows the boat to Guam where a refugee camp has been established.

There, Ha learns about how most of the refugees are either going to France, Canada, or the United States. Ha and her family decide to travel to the United States. They are sponsored by a Southern farmer named Mr. Johnston, who helps the family to settle in Alabama and looks after their interests. Ha’s mother insists they assimilate into American society as quickly as possible, shutting out their old lives entirely. But this is difficult for Ha to do, for she misses Vietnam greatly.

In Alabama, Ha and her family receive mixed reactions from their new neighbors. While many, like Mr. Johnston, Miss Washington (a neighbor), and Miss Scott (Ha’s teacher) are friendly and welcoming, others are not. At school. Ha is bulled by a pink-colored boy who takes every chance he can to make fun of Ha. Ha is humiliated, but comforted and watched out for by not only Mr. Johnston, Miss Washington, and Miss Scott, but by her brothers as well. Vu teaches her self-defense, and Ha’s mother tells her that there is always a time when Ha must defend herself. When the pink-colored boy attempts to become physical with Ha, she uses self-defense against him, frightening him into no longer bullying her.

Slowly, all of the neighbors come around and warm up to Ha and her family, and the family begins to feel welcome at last. As the Vietnamese New Year comes on, a letter is received from Ha’s father’s brother, who has no news about Ha’s father to report. When Ha’s mother loses her amethyst ring--a gift from her husband years before--she takes it as a sign that he is dead. As a result, the family holds a mourning ceremony for him and vows to move on in America while remembering the past.

NOTE: Due to the structure of this novel, this study guide has been arranged into sections according to page numbers. Quotes are therein referenced by section numbers in this guide, by page number, and by paragraph number. This study guide specifically refers to the 2011 Harper Paperback edition of “Inside Out & Back Again.”

Inside Out and Back Again from BookRags. (c)2022 BookRags, Inc. All rights reserved.