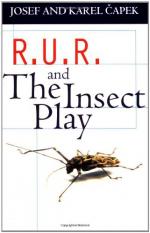 Introduction & Overview of The Insect Play

Karel and Josef Capek's The Insect Play is one of the pair's best known and well-received collaborations. Also known as The Insect Comedy, The World We Live In, and From Insect Life, the play was published in its original Czech in 1921 as Ze zivota hmyzu- The play was first performed at the National Theatre in Brno, Czechoslovakia, on March 8, 1922 (some sources say February), running for about one hundred nights. The Insect Play made its American debut later in 1922, and its London premiere the following year. The play has been performed only intermittently since that time because of the demanding staging it requires.

The brothers Capek began work on the play in 1920. Their first collaboration after an eight-year hiatus, it would also be one of their last. The Insect Play was a combination of many forms, including fable, revue, and satire. All but a few of the characters are insects that are anthropomorphized (given human qualities). The brothers commented on human society in their place and time period (Czechoslovakia in the post-World War I era) via these insects. Many critics believe that the Capeks were inspired by other animal plays and short stories, including Jean Henri Fabre' s La vie des insects (The life of insects) and Souvenirs entomologiques, and a story by Russian author Vsevolod Garsin, What Never Happened. Though The Insect Play has been problematic for critics from the beginning, many have found much to praise over the years. As Lucia Mauro of the Chicago Sun-Times wrote, when commenting on a 1999 production of the play, "their keen observations of the life cycle and poignant visions of war's futility remain relevant to this day."