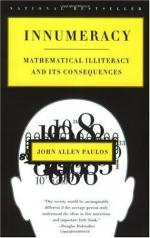 This detailed literature summary also contains Topics for Discussion and a Free Quiz on Innumeracy: Mathematical Illiteracy and Its Consequences by John Allen Paulos.

John Allen Paulos is a mathematician, author, columnist, and professor at Temple University in Philadelphia, Pennsylvania. Paulos is best known for his devotion to mathematics, addressing mathematical illiteracy, and using humor as the basis for mathematics.

Paulos holds a Ph.D. in Mathematics from the acclaimed University of Wisconsin-Madison and has served on the Temple University faculty as a full professor since 1987. The author has also served as a visiting professor at the Columbia University Graduate School of Journalism during the 2001-2002 academic year.

Paulos claims that the initial purpose in writing Innumeracy: Mathematical Illiteracy and its Consequences was to respond to the overwhelming existence of mathematical illiteracy and general misuse. The author believes that many books are written due to anger and freely admits this book is one that falls into that category.

One of the author's most abhorred subjects is that of mathematical illiteracy and how it often goes unnoticed. A large number of people use math incorrectly, regardless of occupation or education. Paulos admits to taking delight in pointing out the misuse and muses that many people take a misguided pride in mathematical illiteracy.

There are a wide number of topics addressed throughout the book supporting Paulos' claims that there are harmful consequences caused by innumeracy. Because of the lack of ability in the mathematical arena, many people are forced to take low paying jobs or quit school, and some are not able to pursue the lifestyle of which they have always dreamed. There is also the greatly underestimated presence of math anxiety which often starts in childhood and can continue to plague even the brightest student throughout his entire academic career.

Paulos spends a great deal of time explaining probability and its various uses. The author also shows how many instances of probability are inaccurate or misused either through ignorance or for the benefit of skewing the final outcome to meet a particular expectation. There are also a number of sections related to coincidence and the tendency to focus on extraordinary events. This leads into the examination of parapsychology and its various sub-topics, all of which Paulos discounts as being scientifically unproven.

Overall, Paulos states that the search for additional information and statistics, which may be incorrect to begin with, is futile. The author has proven that most statistics are utterly meaningless and the world has more than enough information to determine population and other necessary elements of society. The author hopes for a movement that encourages schools to ensure that students have a sufficient knowledge of the basic functions of math and that society will, by and large, learn how to use those skills effectively and with great success.

Aside from his proficiency in mathematics, part of Paulos' appeal is his use of humor throughout the book. This entertainment value also translates to the author's other activities such as teaching and lectures for academic and corporate institutions.