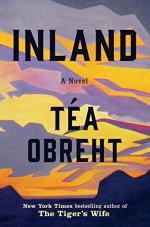 Téa Obreht
This Study Guide consists of approximately 47 pages of chapter summaries, quotes, character analysis, themes, and more - everything you need to sharpen your knowledge of Inland.

This detailed literature summary also contains Quotes and a Free Quiz on Inland by Téa Obreht.

The following version of this book was used to create the guide: Obreht, Téa. Inland. Penguin Random House, 2019.

Téa Obreht crafts a complex tale of early American western migration and homesteading through alternating first person and third person narrative accounts. In the sections titled with the names of cities or territories, the author writes from young adventurer Lurie Mattie's first person point of view, as he recalls to his camel, his many travels and discoveries across the deserts and plains. In the sections labeled with portions of the day, and marked with "Amargo, Arizona Territory, 1893," the author details the experiences and memories of Nora Lark through a third person point of view. By interspersing her two protagonists' stories, the author disrupts conventional notions of linear historical accounts, broadening the reader's experience of her genre-bending tale.

In Lurie's sections, he address his many adventures to his constant camel companion Burke. As a young boy, Lurie lost his father and began robbing graves. Eventually fleeing his hometown, he began a life on the run. Through another job, Lurie met the Mattie brothers, Hobb and Donovan. Together they spent several years of misadventure and troublemaking. After Hobb died of typhoid, Lurie believed he carried Hobb's lingering presence and perpetual driving want inside him. He and Donovan then joined with Donovan's cousins and formed the Mattie Gang.

When Lurie killed a New York Boy, Marshal Berger issued a warrant for the clan's arrest. The gang split up and Lurie lost contact with the Matties. However, he continued running from Berger, somehow escaping his clutches whenever they encountered one another. He continued chasing Hobb's want, adopting his late friend's pickpocketing habits. Caught on board a vessel full of camels meant for cavalry, Lurie met Hadji Ali, or Jolly, and his companions. The men formed an alliance, stole the camels and created the Camels Corps. They ventured from terrain to terrain, causing more trouble and running from the law.

Lurie later encountered Donovan's ghost and realized he must now become the keeper of Donovan's unrealized desire as well, fearing he would never be able to identify or fulfill his own longings. Despite his lack of stability or constant group of companions, Lurie remained strong, finding comfort in Burke's faithfulness. After years of movement, Lurie fell in love with a woman in New Mexico, and stayed for a time. Not long after, however, he reencountered Jolly. The two found a new series of camels and began adventuring again. When they met new troubles, they disbanded, some time later finding one another again. This time, however, Jolly was married and starting a family.

When a group of geologists asked Lurie and Jolly to join them in search of gold, the men agreed. The journey proved long and treacherous and the geologists untrustworthy. Before parting ways, Jolly stole the one piece of valuable rock they found. After the geologists reported the theft, Lurie and Jolly found themselves again attempting to avoid arrest. Jolly ultimately gave the rock away and said goodbye to Lurie, who continued on alone with Burke. Years later, he appears on the Lark property in Amargo, unsettling the family.

In Nora's third person sections of the novel, Nora Lark struggles to maintain emotional and psychological stability in Amargo. As a young girl, Nora grew up in Morton Hole, Missouri with her parents. When Emmett Lark came to town endeavoring to start a school, he began lodging at Nora's parents' boarding house. He and Nora began a friendship that grew into affection. They eventually married and moved to Arizona Territory. Though Nora was desperate to leave her hometown, she was discouraged by the barrenness and hardships in Amargo.

Over time she and Emmett developed a sense of stability and started a family. Emmett began running the town paper, the "Sentinel," and Nora had her first child, Evelyn. Only months after her birth, however, Evelyn died of sunstroke. Nora continues to carry the guilt of her daughter's death, even communing with her spirit on into the narrative present. After Evelyn's death, Nora mothered three sons, Rob, Dolan, and Toby. Later, Josie, Emmett's orphaned and destitute cousin, joined the Lark home, much to Nora's chagrin. Josie's belief that she can commune with the dead, particularly bothers Nora; her alliance with Toby and Dolan's affection for Josie, only aggravates Nora's frustrations.

In the narrative present, when Toby begins insisting he has seen a beast on the family property, Josie seconds his sightings. Nora discourages both their tales, refusing to believe in any fantastic or supernatural beings.

With Emmett gone in supposed search for water, and Rob and Dolan missing under mysterious pretenses, Nora is left alone on the property with Josie and Toby. Eventually she ventures into town, believing her sons to be working at the "Sentinel." However, she finds the printhouse window broken, and a telegram in the back office revealing the boys' inquiry after their father's alleged murder. Though Nora attempts asking several townspeople about Emmett and her sons, she is granted only further confusion and frustration.

Back at the house later that evening, Nora's longtime friend, Sheriff Harlan Bell, pays Nora a visit. Over the course of several hours, the two remember their affection for one another. Though they have never explicitly breached the parameters of their respective marriages, Harlan and Nora care deeply for one another. Whenever Emmett is away on long unexplained stints, Harlan is sure to look in on Nora, to care for her and her boys. During this visit, however, Nora suspects Harlan has something else to reveal to her. When Harlan begins searching the house with Toby for evidences of the alleged beast, he and Nora realize Josie is missing.

A terrifying venture out into the dark recesses of the property reveals Josie lying facedown in the dark, severely injured. She tells Harlan and Nora she was attacked by the beast. Indeed, as Harlan carries Josie towards the barn, the mysterious creature attacks again, injuring Harlan. Nora hides Josie from Toby in the barn and helps Harlan to the house. In the kitchen, they are shocked to find county cattle king, Merrion Crace, cooking steaks.

Though he feigns niceties, he has really come to the property to announce that Rob and Dolan are suspected for the murders of the Sanchez boys, men they believed murdered their father. Though Nora is reluctant to believe her sons' guilt and her husband's death, through Evelyn's ghost, she feels both are true. After the men leave, Nora tends to Josie. At dawn, she is shocked to encounter the creature again: an ill camel with a long-deceased rider still strapped to his back. She puts the animal out of its misery and unties the body from its back. She marvels at the man's canteen, still carrying water, despite the obvious passage of time. She feels this miracle is a sign, reflecting on all she has withstood, all she has experienced and seen.

More summaries and resources for teaching or studying Inland.