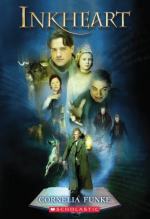 This detailed literature summary also contains Topics for Discussion and a Free Quiz on Inkheart by Cornelia Funke.

Meggie Folchart lives alone with her father Mo, a book repair specialist. Her mother disappeared when Meggie was a baby. A late night visit from a mysterious man named Dustfinger sets off a series of events that bring Meggie and her father into confrontation with the sinister Capricorn. While imprisoned by the villain Capricorn, Meggie learns of her mother's true fate and of her father's secret ability to read characters and objects out of books and into real life. Meggie learns that she has inherited her father's special skill and together, with the help of Dustfinger, Meggie's great aunt Elinor and Fenoglio, the writer of Inkheart, they defeat Capricorn and Meggie is reunited with her mother.

The visit of a mysterious stranger named Dustfinger, leads Meggie Folchart's father, Mo, to decide to flee their small farm cottage and take refuge in the estate of Meggie's great aunt Elinor. On the way to Elinor's, Meggie learns from her father and Dustfinger that they are fleeing an evil man named Capricorn, who not only desires an object long possessed and hidden by Mo, but also wishes to forcibly employ Mo for a mysterious talent. Mo refuses to tell Meggie what this talent might be.

Once at Elinor's estate, which to Meggie's delight is filled with books, Mo is betrayed by Dustfinger, who arranges for his kidnapping by Capricorn's black jacket henchmen. However, the kidnappers fail to find the treasured object, a book called Inkheart, because it is in Elinor's possession when Mo is kidnapped. Dustfinger returns to the estate on Capricorn's orders and convinces Meggie and Elinor to attempt to rescue Mo from Capricorn's hidden village in the Italian foothills.

Meggie and Elinor are caught sneaking into the village and are brought before Capricorn. Capricorn burns hundreds of copies of Inkheart, retaining only one. While imprisoned, Mo tells Meggie and Elinor that he has a special ability to read characters and objects out of book and into real life. Anything read into existence in this manner swaps places with an object or person that is nearby when Mo reads. It is in this manner that, on the night he discovered that his talent extended to characters from books, Mo accidentally read his wife Theresa, Meggie's mother, into the book called Inkheart. At the same time, he read three characters out of the book, the cowardly performer Dustfinger, the evil Capricorn, and Basta, Capricorn's chief lieutenant.

Mo, Meggie, Elinor, and Dustfinger escape from Capricorn and travel to a nearby village where Fenoglio, the author of Inkheart lives. Basta follows and recaptures Meggie, along with Fenoglio. Dustfinger returns and attempts to sneak into the village and steal the only remaining copy of Inkheart from Capricorn, but is thwarted when his conspirator, a mute maid named Resa, is caught. While a captive, Meggie realizes that she shares her father's gift. When Capricorn learns of this, he decides to have her read his favorite assassin, the Shadow, out of Inkheart. The Shadow will the executive Dustfinger and the maid Resa, who Meggie realizes is actually her mother, Theresa.

Meggie and Fenoglio turn the tables on Capricorn by altering the text that Meggie will read and, as Mo sets fire to the village with the aid of a young man named Farid whom he read out of another book, Meggie reads the lines that put an end to Capricorn.