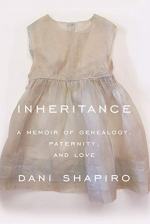 Dani Shapiro
This Study Guide consists of approximately 52 pages of chapter summaries, quotes, character analysis, themes, and more - everything you need to sharpen your knowledge of Inheritance.

Inheritance: A Memoir of Genealogy, Paternity, and Love Summary & Study Guide includes comprehensive information and analysis to help you understand the book. This study guide contains the following sections:

This detailed literature summary also contains Topics for Discussion on Inheritance: A Memoir of Genealogy, Paternity, and Love by Dani Shapiro.

The following version of the book was used to create this study guide: Shapiro, Dani. Inheritance: A Memoir of Genealogy, Paternity, and Love. Knopf, 2019. Amazon Kindle E-book Edition.

Dani Shapiro is shocked to learn, after taking an at-home DNA test, that her father, Paul Shapiro, was not her biological parent. By piecing together the results of her test with seemingly innocuous comments her mother had previously made about her conception, and combining that information with online research, Dani is quickly able to find the man she believes to be her biological father. Conceived through artificial insemination, Dani identifies Dr. Ben Walden, a retired surgeon and expert on medical ethics, as the sperm donor who would become, unknown to both of them, her biological father.

With both her parents dead, Dani has to navigate this revelation mostly on her own. Her sense of self and identity is upended as she questions who she is and how she fits into her family. Having been raised as an Orthodox Jew, and having fielded comments all her life about how she does not "look Jewish," Dani's sense of inheritance and understanding of the culture and traditions from which she comes is also thrown into question. Dani reaches out to Ben Walden and they begin a tentative correspondence. Dani learns about her genetic and medical history but is keen to meet Ben, just once, though he is primarily concerned with his privacy and the privacy of his family and initially declines to meet her.

Since her discovery, Dani is consumed with wanting to know whether or not one or both of her parents knew the truth of her conception. She reviews her childhood, researches the history of donor insemination during the time of her conception, and consults with friends, family members, and spiritual leaders about what this means for herself and her family. Dani's sense of otherness in her family begins to make sense to her and she realizes that there had always been secrets in their family unit. Dani reflects not only on questions of identity but on what links the members of a family to each other and the ethics of donor insemination, particularly when it comes to issues of secrecy and anonymity.

After a time, Ben changes his mind and he and Dani are able to meet. They develop a relationship and get to know one another. Dani also meets Ben's wife Pilar and, eventually, his daughter Emily. As she moves forward on her journey and gets to know her biological relatives, Dani eventually concludes that, though she has much in common with Ben, particularly biologically, she is and will always be Paul Shapiro's daughter.

More summaries and resources for teaching or studying Inheritance: A Memoir of Genealogy, Paternity, and Love.

Inheritance: A Memoir of Genealogy, Paternity, and Love from BookRags. (c)2021 BookRags, Inc. All rights reserved.