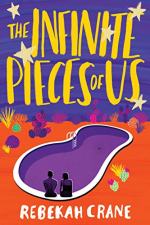 Infinite Pieces of Us Characters

The narrator and protagonist of the novel, Esther is a 16-year-old girl struggling to move on after her pregnancy and the adoption of her child. After Esther's mom and stepfather Tom make her give up her baby, they move Esther and her sister from Ohio to New Mexico in an attempt to hide the truth of Esther's mistake.

Separated from her ex-boyfriend Amit, her former friends and life in Ohio, and homeschooled in her new home in Truth or Consequences, New Mexico, Esther is overwhelmed with guilt, shame, and loneliness. While her mother and Tom think getting Esther involved in their church will encourage her to start a newer healthier life, Esther feels nothing but isolation. Rather than feeling accepted at church, she feels even more isolated and confused about the truth of her identity.

Making friends with Color, the girl who cleans her home, helps Esther begin...

Infinite Pieces of Us from BookRags. (c)2022 BookRags, Inc. All rights reserved.