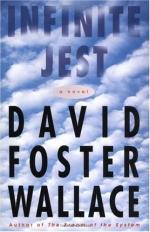 David Foster Wallace
This Study Guide consists of approximately 44 pages of chapter summaries, quotes, character analysis, themes, and more - everything you need to sharpen your knowledge of Infinite Jest.

This detailed literature summary also contains Topics for Discussion and a Free Quiz on Infinite Jest by David Foster Wallace.

Infinite Jest is a novel written by David Foster Wallace. The novel is a interconnected sequence of events, told out of timeline order, that focuses on addiction in all its forms. Whether its drugs, sex, or fame, the novel's primary goal is to examine the need for these addictions and show that it is possible to addicted to addiction itself. To hammer this point home, Wallace continues a running discussion between two of the characters. Remy Marathe and Hugh and Helen Steeply spend much of the novel discussing the nature of addiction throughout American and foreign cultures. The two are secret agents for opposing sides, The Organization of North American Nations and the Wheelchair Assassins, a Quebec separatist group, although they are friendly to each other. Their discussions frame the actions throughout the rest of the novel. The majority of the action takes place in the Year of the Depends Adult Undergarment. In this future society, years ceased to be designated chronologically, but began being named for well-known products on the market.

The novel begins with Hal Incandenza, a student at the Enfield Tennis Academy. Hal has had a nervous breakdown and the rest of the novel is told in flashback with two groups at interconnected places. The first, the Enfield Tennis Academy, is the school where Hal and his brother, Mario, attend and their mother, Avril Incandenza, works. The second location is the Ennet House Drug and Alcohol Recovery House, where many addicts introduced through the novel are sent for treatment. The mindsets and predilections of the characters are analyzed throughout the novel to get a sense of their feelings of isolation. Meanwhile, several parties are searching for The Entertainment, also known as the Infinite Jest, which is a film so funny that anyone who views it becomes lifeless and only wants to continue viewing the tape. James Incandenza created the film, which stars Joelle Van Dyne, before he committed suicide. Hal Incandenza is kidnapped and tortured for information as to its location.

One of the groups who wants to obtain the film is the Wheelchair Assassins, a group of Quebec separatists, to use in terrorism against the United States. In the future society, Canada and the United States are now one, so the separatists begin to focus their attention on being anti-American, since the Americans still control most of the government. The United States Office of Unspecified Services also seeks to find the tape to prevent this. Eventually both sides succeed in obtaining a copy of the tape. Whether or not they use it as a weapon of war is left to be seen by the conclusion of the novel.

More summaries and resources for teaching or studying Infinite Jest.