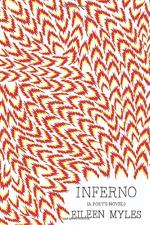 Eileen Myles
This Study Guide consists of approximately 38 pages of chapter summaries, quotes, character analysis, themes, and more - everything you need to sharpen your knowledge of Inferno.

This detailed literature summary also contains Quotes and a Free Quiz on Inferno by Eileen Myles.

The following version of this book was used to create this study guide: Myles, Eileen. Inferno: A Poet’s Novel. OR Books, 2016.

Inferno: A Poet’s Novel is a fictionalized memoir based on the life of the author, poet Eileen Myles. The structure of the novel is inspired by the Divine Comedy by Dante Alighieri, which is divided into three parts: “Inferno,” “Purgatorio,” and “Paradiso.” Inferno: A Poet’s Novel largely concerns Eileen Myles’ life as a poet in New York City and is similarly divided into three parts. Eileen functions as both the novel’s narrator and its main subject, conveying accounts of major events in her life, as well as relating her thoughts and feeling regarding those events.

The first section largely deals with Eileen’s early years living in New York City, but it opens with an anecdote from her days attending college at the University of Massachusetts Boston. There, Eileen developed a mentor-mentee relationship with one of her English professors, Eva Nelson, on whom Eileen had a latent crush. Mrs. Nelson praised Eileen’s poetry writing, and this encouraged Eileen to pursue poetry and creative writing as a career. After graduating, Eileen moved to New York City, where she lived in relative poverty and worked various odd jobs to support herself while working on her own writing and establishing her presence in the New York poetry scene. Eileen attended graduate school at Queens College, but she dropped out not long after enrolling. However, while doing research for a professor there, she discovered the St. Mark’s Poetry Project and decided that she wished to become involved in that organization. This section also includes an anecdote regarding a time that Eileen tried to make money by sleeping with a man in exchange for payment. The anecdote is told in parts throughout the section, and it represents a moment of great shame and desperation for the young Eileen.

The second section of the novel is loosely structured like a grant proposal, but it generally consists of a series of personal anecdotes, just like the rest of the novel. This section largely focuses upon Eileen’s actual artistic career, when she was able to support herself mostly on money made from her artistic endeavors. The section discusses several poetry and performance pieces of which Eileen was quite proud. Eileen even received major arts grants to fund these pieces. These pieces were largely political, dealing with important social issues of the time such as issues of feminism, women’s rights, and gay rights (as Eileen realized after moving to New York that she was in fact a lesbian.) This section also describes various examples of Eileen’s growing influence and connectedness regarding the New York arts scene. Eileen’s work gained the interest of a successful and wealthy artist named Eden O’Malley, who supported and promoted Eileen. Eileen also began to have interesting opportunities to travel and perform, such as when she took a tour of Germany to do poetry readings with friends and acquaintances who were also poets. Other exciting travel opportunities for her included visiting Dante’s grave on a travel grant and going to Hawaii for a poetry reading.

The final section of the novel is entitled “Heaven” and mostly concerns Eileen’s journey of personal and sexual self-discovery. Eileen discusses the significant intersection of art, poetry, identity, and sexuality in her life. She tells about her time working for a publishing company after graduating from college and realizing that poetry was more real and more important to her than having a steady office job. She then relates the journey of her sexual self-discovery in New York City, stating that poetry and the people around her were both integral factors in that journey. She says that poetry helped her to explore her own identity, and she says that her journey towards her sexual self-discovery culminated when she had a brief yet passionate sexual relationship with a young woman named Rose Lomak. Eileen then had a long series of female sexual partners, and she was able to become comfortable in her new identity thanks to the company and writings of other gay poets. In the end, Eileen says that she was able to reach a heavenly state of peace and fulfillment thanks to all of these factors and journeys, whether they were artistic, sexual, personal, political, or any number of other things that affected her life after moving to New York City.